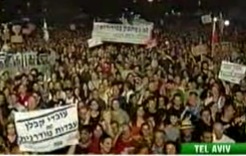 A march of tens of thousands of Israelis took place in Tel Aviv Saturday, with thousands more gathering in Jerusalem, to call on the Israeli government to change its budgetary priorities and address social concerns.One of the protest organizers, Nicola Simmonds, told reporters, “Here in Israel we are not in an economic recession. Our problem isn’t that we don’t have enough money. Our problem is that it’s being mismanaged.”

In late September, responding to protests and encampments throughout the summer, the Israeli government raised taxes on corporations and on the wealthiest Israelis. But protesters say that this is not enough, and more action needs to be taken to address social inequality in the country.

While protesters shied away from challenging the ongoing Israeli military occupation of Palestine and subjugation of the Palestinian people both in the Occupied Territories and inside Israel, they did question the high military expenditure of the Israeli government.

The Israeli government spends 16 billion dollars a year on the military (18% of which is funded by the US), and many protesters that came out on Saturday believe that number is too high, and should be cut to provide for social programs.

Government subsidies for Israeli settlements in the West Bank were also questioned by some of the protesters. Israeli journalist Bradley Burston wrote, “Even if the settlement activity is not blocked, the fact of the widespread nature of allocations and subsidies that go out to the settlements may change people’s minds eventually about the wisdom of continuing to build there.”

All Israeli settlements are constructed on Palestinian land seized by military force or government confiscation, and are considered illegal under international law and the Fourth Geneva Convention.