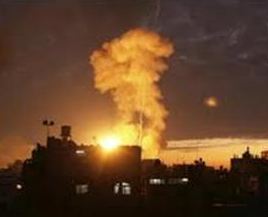 The ceasefire was reached following a day of bloody shelling that led to the death of nine Palestinian fighters in Gaza and one Israeli. Dozens of injuries were reported.

Adham Abu Salmiyya, spokesperson the of Higher Committee of the Medical and Emergency Services in Gaza, stated that the Israeli Air Force carried out at least ten strikes in two hours, Sunday at dawn, leading to damages in Gaza District, Al Wista (Central) District, in addition to Khan Younis and Rafah in the southern part of the Gaza Strip; dozens of residents, especially children, suffered anxiety attacks due to the shelling; damage was reported.

Furthermore, the Palestinian Information Canter reported that, in Khan Younis, the army also bombarded Al Qadisiyya Center that belongs to the Al Qassam Brigades of Hamas, Ahrar Movement Center, and a third area located west of the city.

The Center added that the truce between the resistance and Israel was declared in Egypt shortly after 3 a.m Sunday, but the Israeli army did not stop its bombardment of the Gaza Strip, and carried out additional strikes targeting Khan Younis.

On Sunday at dawn, the army fired missiles at fighters in Al Nafaq Street, in Gaza City, but the fighters managed to escape the shells unharmed.

Later on, the army fired a missile at residents in Ash-Shejaeyya neighborhood east of Gaza city, in addition to shelling Tunis Base that belongs to the Al Qassam Brigades of Hamas in the city, and third area east of Rafah.

The amount of destruction remains unclear due to the extensive presence of Israeli war-jets, and drones flying over different parts of the Gaza Strip.

The Israeli attacks on the Gaza Strip led to the death of nine Palestinian fighters in less than 24 hours; excessive damage was reported and several residents were wounded.

The resistance fired dozens of shells into southern Israel and leading to the death of one Israeli man. while several others suffered anxiety attacks.

Israeli Ynet News reported that a total of 24 shells and rockets were fired into Israeli territories in the south on Saturday. Shells were fired into Sha’ar Ha-Negev Regional Council in the Negev.