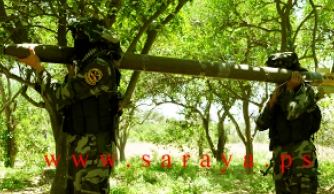 Palestinian ambassador in Egypt, Yasser Othman, denied reports stating that the Palestinian Authority had officially declared that all efforts to maintain calm have failed.

Othman told the Maan News Agency that Egypt is still holding talks with all parties in an attempt to reach a ceasefire deal, and that Cairo believes that all involved parties are interested in containing the recent escalation, but added that this issue needs more time and efforts.

Al-Quds Brigades spokesperson, Abu Ahmad, stated that his group “is now only interested in a swift and painful retaliation against the occupation”.

“We informed all parties that we will not be part of any truce based on criteria used in previous truce deals, every time there is a truce, the occupation strikes again and kills our leaders and our people”, Abu Ahmad told Maan agency, “Today, everybody, all Arab and European mediators must realize that the only the resistance can declare or void truce, the occupation will be begging for a truce”.

He further stated that Israeli violated every previous truce, adding that “this issue must be dealt with, resistance will fire missiles, and will continue target the occupation”.

Furthermore, Egyptian sources also confirmed that truce efforts mediated by Cairo have failed, after the country was unable to convince the Islamic Jihad to abide by its terms, yet, efforts to reach one are ongoing.

Israeli sources reported that Israeli Prime Minister, Benjamin Netanyahu, and his Defense Minister, Ehud Barak, are holding talks with Egyptian officials in an attempt to reach a ceasefire agreement.

On Sunday morning, Israeli Army Chief of Staff, Benny Gantz, held meetings with senior army officials in the south of the country to weigh the Israeli response.
Gantz confirmed that Egypt and several other countries are still mediating in an attempt to reach a ceasefire agreement.

It is worth mentioning that Israel stated that its “Iron Dome” interception system proved to be ineffective in the recent wave of shells fired into Israel.

Nine Palestinian fighters of the Al Quds Brigades were killed, including four overnight, in less than 24 hours while, while several Palestinians were inured due to Israeli shelling and bombardment. Palestinian shells fired into southern Israel led to the death of one Israeli man, a number of Israelis suffered anxiety attacks.