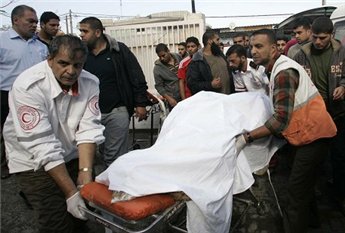 Gaza resident, Ahmed Gargun, was killed and another was wounded on Sunday afternoon as an Israeli air strike targeted a group of the National Resistance Brigades (NRB), the armed wing of the Democratic Front for the Liberation of Palestine (DFLP). The attack occurred east of the border city of Rafah, in the south of the Gaza Strip.Adham Abu-Silmiyya, medical spokesman in Gaza, told the Ma’an News Agency that the wounded were moved to local hospital, with serious injuries reported.

On Sunday morning, Palestinian groups in Gaza and Israel agreed on a ceasefire, but the Israeli fighter jets are still patrolling the skies over the Gaza Strip.

For its part, the NRB mourned the killing of one of its fighters, Ahmad Gargun, head of the rocket-firing group within the Brigades.

The NRB issued a statement saying that Israel is held responsible for the military escalation in the Gaza Strip. Moreover, the statement called on the DFLP fighters to respond to the Israeli air strike, which led to the death of one of its fighters.

The Brigades also called upon the international community to take action regarding the protection of Palestinian civilians who are exposed to the Israeli air strikes and missiles.

The escalation accelerated on Saturday, when an Israeli air strike targeted a military training center, which belongs to the Al-Quds Brigades, the armed wing of the Islamic Jihad. The attack led to the death of five of the Al-Quds Brigades’ fighters, and several others were reported as injured.

It is worth mentioning that the number of killed people in this latest escalation amounts to 10 Palestinians and one Israeli. The Israel was killed in Asqalan when Palestinian rockets targeted houses in the city.