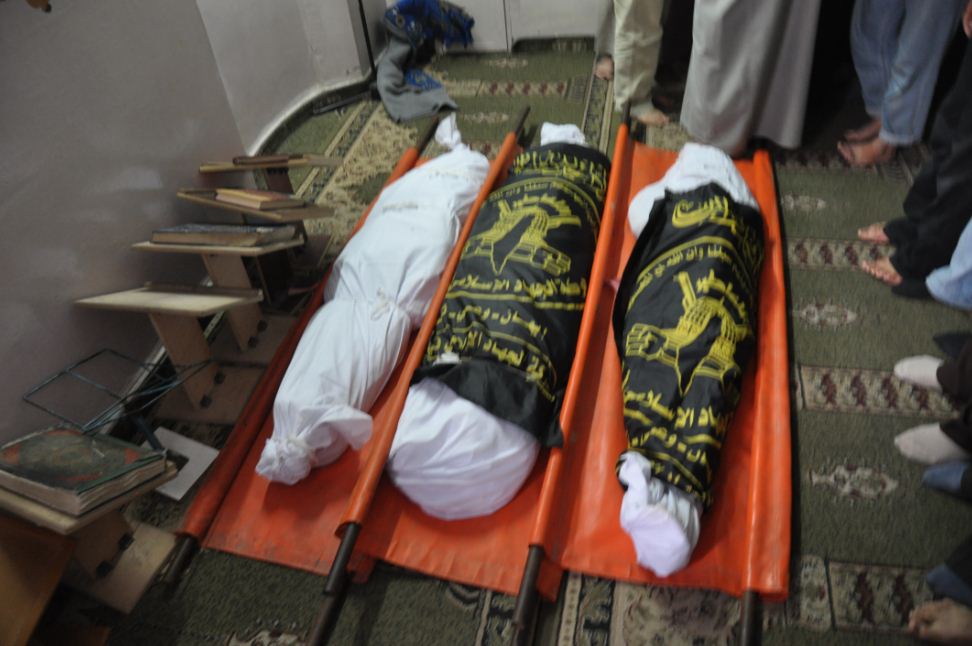 Palestinian Medical sources reported that the Israeli Air Force (IAF) bombarded an area in the southern part of the Gaza Strip on Sunday, killing two Palestinian fighters. The latest escalation raises the number of Palestinians killed in Gaza since Saturday to twelve. The Israeli Army stated that its military jets fired missiles at a group of fighters shortly after they launched shells into the Western Negev, scoring a direct hit. The army added that the fighters fired six mortar-shells into Israel on Sunday, and accused the resistance in Gaza of seeking further escalation and tension.

Medical sources in Gaza confirmed that two fighters from an area in the southern part of the Gaza Strip were killed after being targeted by Israeli missiles.
They were identified them as Yousef Abu Abdo and Ali Al Aqqad; both from Khan Younis.

The Al Ansar Brigades, the armed wing of the Al Ahrar Movement, issued a press release stating that the two slain fighters are members of their group, and vowed retaliation.

The death of the two fighters increases the number of Palestinians killed by Israeli military fire in the Gaza Strip since Saturday to twelve.

Most of them are fighters from the Islamic Jihad, while one fighter of the National Resistance Brigades (NRB), the armed wing of the Democratic Front for the Liberation of Palestine (DFLP), was killed on Sunday evening in an Israeli airstrike targeting an area east of Rafah. On Sunday afternoon another fighter of the NRB was also killed in a separate Israeli shelling.

On Monday at dawn, the IAF carried out air strikes targeting Khan Younis, despite the fact that the new ceasefire went into effect on Sunday at 10 P.M. Israeli fighter jets were extensively patrolling over the skies of the Gaza Strip on Monday morning.

Israeli Yedioth Aharonoth reported that despite the escalation, Israel decided to reopen the Karem Abu Salem (Kerem Shalom) crossing to allow the entry of some goods into Gaza.

Israeli military sources reported on Sunday that several regional and international mediators are trying to restore calm in the region. Egypt is heavily involved in truce efforts.

In a press release issued by the Al Quds Brigades on Sunday, the group said that it will not accept any truce with Israel when Israel’s latest escalation led to the death of nine of its fighters.

It added that its fighters will continue the firing of shells and missiles into Israel, and that it is now “only interested in a swift and painful retaliation against the Israelis.”

On Monday, Abu Ahmad, spokesperson for the Al Quds Brigades, told The Seventh Day Egyptian paper that his group values the Egyptian efforts, and that they will abide by the truce as long as Israel does not violate it.

He stated that the Brigades will retaliate to any violation, and that it will be determining the time and place of this retaliation, adding that all armed groups will abide by the declared truce as long as Israel fulfils its part.