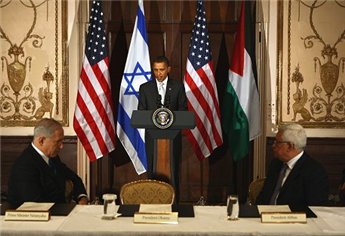 During the Quartet visit to Palestine last week, Israel submitted a proposal to break the current impasse of the peace process by initiating secret direct negotiations with the Palestinians, but the Palestinian Authority rejected the offer.This rejection, however, upset Israeli Prime Minister, Benjamin Netanyahu, who stated that Palestinian President, Mahmoud Abbas, is not interested in peace with Israel.

Israeli Paper Maariv reported Monday that the Israeli proposal, that was presented to the Quartet, called for initiating direct Palestinian-Israeli peace talks headed on the Israeli side by Netanyahu’s adviser, attorney Yitzhak Malcho, and Chief Palestinian Negotiator, Dr. Saeb Erekat.

The aim of these negotiations is to coordinate a direct meeting that would bring Abbas and Netanyahu together in order to reach to a final agreement.

The newspaper’s website quoted some sources close to Netanyahu’s office stating that the proposal was made during the meeting which was held last week in Jerusalem, between Molcho and representatives of the Quartet, and a separate meeting between the representatives and Saeb Erekat.

During the meeting, Erekat told Quartet representatives that the Palestinians will not hold any secret negotiations, or any sort of direct talks with Israel before it halts all of its settlement activities and stops its violations.

Erekat also said that Israel must recognize international resolutions by recognizing the Palestinian right to establish a state in all of the Palestinian territories occupied by Israel in 1967, including occupied East Jerusalem.

Netanyahu was angered by the Palestinian stance and claimed that President Mahmoud Abbas is not interested in holding talks with Israel to end the Palestinian-Israeli conflict.