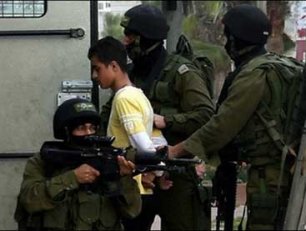 Soldiers also broke into the home of Ehab Moayyad, and handed him a military order requiring him to head to the nearest security center for questioning.

Israel stepped-up its attacks against the village after its residents started weekly protests demanding the army to reopen the main road that leads to the village. The has been blocked by concrete blocks since more than nine years.

On Monday evening, army kidnapped three youths in Ad-Doha town, west of Bethlehem. The three were heading back home after attending a sports event in the Al-Khader town, near Bethlehem.

They were stopped by the army near the Plastic Factory, in the nearby city of Beit Jala.

Palestinian security sources reported that the three were identified as Mo’taz Izba, 16, Ahmad Idrees, 18, and Mos’ab Al Azza, 18. Soldiers cuffed them and forced them to stand in the street for a while before kidnapping them.

At least nine Palestinians were kidnapped by the Israeli army in several areas in the West Bank on Monday.