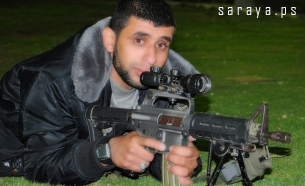 The Al Quds Brigades, the armed wing of the Islamic Jihad, reported that one of its fighters was killed on Tuesday evening, when the Israeli army shelled fighters who had clashed with Israeli soldiers, who had invaded an area to the east of Gaza City; several of the fighters were injured.The Brigades identified the fighter as Ismael Al-Ar’eer, 23, from Ash-Shujaeyya neighbourhood in Gaza.

The Brigades said that the army initially fired shells at fighters gathered near Ali Bin Al Khattab Mosque, in Az-Zeitoun, Gaza City, wounding two of them.

Later on, the army fired another shell at fighters near Anas Bin Malek Mosque in Ash-Shujaeyya, east of Gaza City, killing Al Ar‘eer and wounding three others.

Also on Tuesday evening, a number of Israeli armoured vehicles and bulldozers invaded the Industrial Zone near the Karni (Al Mintar) Crossing, and opened fire, media sources in Gaza reported.