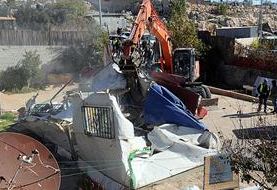 Palestinian sources reported that Israeli soldiers demolished, on Tuesday morning, a Palestinian home in the Al Khalayla neighborhood, north of occupied East Jerusalem. The home was the third to be demolished in just 24 hours.Eyewitnesses reported that the seventy square metre home belongs to Khamees Ad-Dado and his eight family members.

The home was the third to be demolished by the army in illegally annexed East Jerusalem the last 24 hours. On Monday, soldiers demolished a home belonging to Majdi As-Salayma, in Al Ashqariyya neighbourhood in the city. Six family members lived in the now demolished property.

Earlier on Monday, soldiers also demolished a home in Yasoul neighborhood, in Silwan, East Jerusalem. Resident Borhan Zakariyya lived in the 150 square meter home along with his seven family members.

The usual claim Israel provides when demolishing Palestinian homes is that the constructions were not approved and licensed by the Jerusalem Municipality.

While Israel is ongoing with its settlement construction and expansion activities, Palestinians living in the Old City of Jerusalem and nearby areas are rarely granted construction permits.

East Jerusalem is considered an occupied city under International Law; it was captured by Israel, along with the Gaza Strip and the West Bank, during the 1967 Six-Day War. Israel annexed East Jerusalem weeks after war, and in 1980 the Israeli Knesset (parliament) declared the whole of Jerusalem the undivided and eternal capital of Israel.