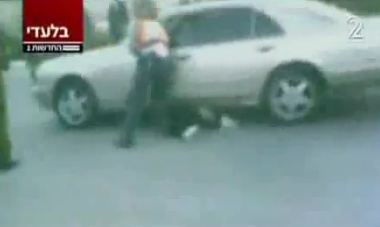 The Israeli District Court in Jerusalem sentenced a settler, who rammed and repeatedly drove over a wounded Palestinian with his car, to three months “Public Service”.The Palestinian has been identified as Waseem Maswada, a resident of the southern West Bank city of Hebron. Maswada went to the entrance of the Keryat Arba’ settlement in Hebron, and proceeded to stab two settlers, man and women.

Israeli soldiers then shot Maswada, and wounded, he fell to the ground.

Shortly after the shooting, settler “David Mizrahi” attacked the wounded settler male, mistaking him for the Palestinian stabber. When he realized his mistake, he drove his car over the wounded Palestinian back and forth despite the presence of Israeli soldiers on the scene.

As part of the plea bargain, Mizrahi confessed to committing the ramming act, while the court regarded it as “an act of self-defense” and not premeditated. The bargain disregarded the fact that the Palestinian was already injured, lying on the ground, and bleeding.

Video As Published By Channel 2