New Jerusalem Park To Be Built Mainly On Arab Land 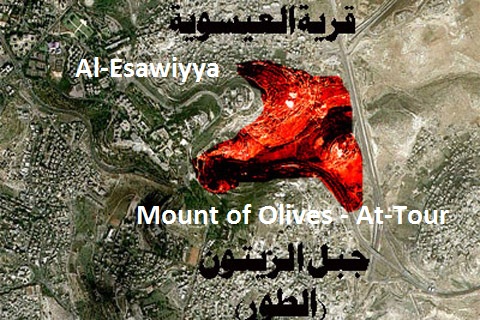 The so-called Regional Construction and Planning Committee at the Jerusalem Municipality prepared a plan for the construction of a new “National Park” in Al Masharef Mountain (Mount Scopus area). Activists in Palestine and Israel said that the plan aims at preventing the development of Al Esawiyya and At-Tour, both Arab neighbourhoods. The Jerusalem Municipality claimed that the park will have a great significance on both the “natural and the archaeological aspects of the city”.

The park will be built on 734 Dunams of land that are mainly privately owned by the Palestinian residents of Al Esawiyya and At-Tour, while some parts of it will be built on Lifta village, which was destroyed during Israel’s creation in Palestine in 1948.

Palestinians and Israeli peace activists said that the real motives behind establishing this park is to control more Palestinian land, and to designate an area for a future Jewish-only settlement that would continue to choke the surrounding Palestinian neighbourhoods.

They also stated that fifteen Palestinian buildings will be removed as part of this plan.
Residents of Al Esawiyya and At-Tour have been trying to get the municipality to approve an expansion to their neighbourhood, due to the natural increase of their population. The new plan would make such an expansion nigh on impossible, especially since Israeli settlements are surrounding the two areas.

The “National Park” project was approved by the Jerusalem Municipality this past April; it also aims at creating a link between Jerusalem and Ma’ale Adumim settlement.

In related news, the Israeli National Security Council has discussed another plan that aims to construct the King’s Garden, which would result in the destruction of 22 Palestinian homes in East Jerusalem.

The plan is also considered a “tradeoff”, as Israel offered to grant permits to 66 Arab-owned buildings in return for establishing the touristic garden in the area. The plan was met with local and international objections.

Member of the Jerusalem City Council, Yair Gabai, stated that “There is no sovereignty without implementing the law,” adding that “Israel should not bow to the outlaws.” He is of course referring to the indigenous Arab inhabitants of the city, and their Israeli supporters.

He claimed that the Arabs are “Illegally building on private and historic sites,” and that “Israel must explain to the International Community that the King’s Garden will also improve the quality of life to the residents of East Jerusalem.”

He added that during his meeting with Richard Miron, a United Nation’s Middle East envoy, Miron said that the UN is willing to be part of this initiative, the Arabs48 News Website reported.

The Palestinians seek East Jerusalem as the capital of their future independent state. Israel occupied Jerusalem along with the West Bank and the Gaza Strip in 1967. On July 30 1980, the Israeli Knesset passed that so-called “Jerusalem Law” declaring Jerusalem as the eternal and united capital of Israel.

The resolution also called on member countries to remove their embassies and diplomatic missions from the city.

It was passed by fourteen countries; whilst there were no votes against it, the United States abstained.