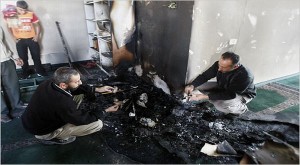 On Wednesday at dawn, Israeli settlers set fire to the main entrance of the Broqeen Mosque, and a number of Palestinian cars parked nearby, at a village near the West Bank city of Salfit.Local sources reported that several armed Israeli settlers invaded the village and tried to burn down the mosque, but were only able to set its entrance ablaze. The settlers then burnt a number of parked cars within the vicinity.

The recent attack is part of a larger “Price Tag” campaign against the Palestinians, their holy sites, and their lands. The settlers blame the Palestinians for any evacuation of illegal settlement outposts in the occupied territories, and they even deface and vandalize homes and vehicles that belong to Israel’s Peace Now Movement, and its activists.

On Tuesday and Wednesday, November 8 and 9, extremist settlers killed one Palestinian, and set three Palestinian cars ablaze near the southern West Bank city of Hebron. The settlers also fired tear gas at a family of Palestinians in Artas village, near Bethlehem.

A ten-year old child was among those attacked, and he was transferred to a hospital in Beit Jala after being rendered unconscious by the gas.

Earlier in November, a number of Israeli settlers set fire to a tractor belonging to a Palestinian farmer, after trying to attack him in the northern West Bank city of Nablus.

On Sunday, October 2nd, 2011, a group of extremists Israeli right-wingers burned a mosque at the entrance of Toba Zanghriyya village in the Galilee, and wrote “Price Tag” and “Revenge” on its walls.

On Monday, September 5th, 2011, a group of extremist Israeli settlers broke into a mosque in Qasra village, near the northern West Bank city of Nablus, and torched it after destroying its property and writing anti-Arab slogans on its walls.

On Tuesday June 07, 2011, settlers burnt a mosque in Al Mughayyir village, near the central West Bank city of Ramallah, and wrote racist graffiti on it walls.

On Sunday, October 25, 2010, extremist Israeli right-wingers attacked an ancient mosque in Ma’alul village near Nazareth, inside Israel. They removed the stones and spray-painted slogans of the Israeli settler movement on the walls.

On Sunday, October 3, 2010, a group of fundamentalist Israeli settlers broke into a mosque in Beit Fajjar, near Bethlehem, and set it ablaze.

On Tuesday, May 4, 2010, a group of fundamentalist settlers torched the main mosque of the Al Lubban Al Sharqiyya village, south of the northern West Bank city of Nablus.