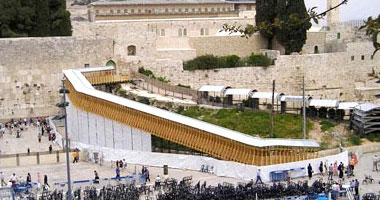 Head of the City Council in Jerusalem, Nir Barkat, ordered the closure of the historic Al Magharba Gate Bridge, in occupied East Jerusalem, under the pretext that the bridge is unsafe, and endangers the lives of those who use it.A month ago, the Engineer of the Jerusalem Municipality ordered the Bridge demolished, but Jordan and Egypt intervened and convinced Israeli Prime Minister, Benjamin Netanyahu, to void the decision as such an act could ignite a new wave or violence in Palestine and the Arab world.

On Thursday, Barkat demanded Netanyahu to authorize the destruction of the Gate.

Barkat has been demanding that the bridge should only be used by the Police and the Army when countering protests in the Al Haram Al-Shareef (The Noble Sanctuary).

Last October, the Jerusalem Municipality decided to demolish, in 30 days, the Al Magharba Gate Bridge that leads to the Al Buraq Wall in the Al Aqsa Mosque.

The Israeli government and the Jerusalem Municipality have plans to build a gate that allows military vehicles to reach the Sanctuary, and to expand the praying area designated for Jewish worshipers.

Israel tried to coordinate the move, to replace the wooden bridge, with Jordan and Egypt, but the two countries rejected the move, and transferred the issue to the Arab League, which in return lodged a campaign against the act to the UNESCO.