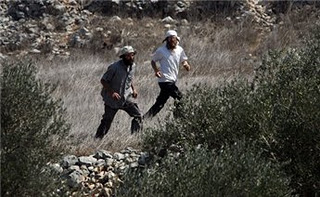 A group of extremist Israeli settlers opened fired, on Thursday, at a group of Palestinian shepherds tending their sheep in the eastern hills of the northern West Bank city of Nablus.The shepherds told the Palestinian News and Info Agency, WAFA, that four armed settlers approached them, near the village of Yanoun, and opened automatic fire at them.

The shepherds took shelter from the bullets and no one was harmed in the attack.

They added that other settlers also hurled stones at the sheep.

The attack is one of many and repeated attacks carried out against the Palestinians in the occupied territories.

Such attacks included burning mosques and writing racist graffiti on their walls, in addition to attacks against Palestinian homes and vehicles.