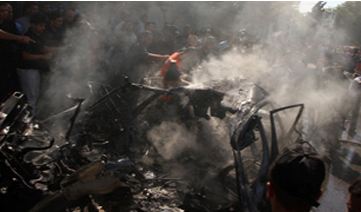 Palestinian medical sources reported that the Israeli Air Forces carried out a Friday dawn airstrike, targeting the Gaza Strip. One Palestinian has been killed, and seventeen have been wounded; most of the injured are members of the same family.Adham Abu Salmiyya, spokesperson of the Higher Committee of the Medical and Emergency Services in Gaza, reported that resident Bahjat Az-Za’lan, 38, from Gaza City, was killed. Twelve residents, most of them members of his family- including his wife and a number of their children- were injured. Two of his wounded children are in serious condition.

The injured include seven children, two women and two elderly. Abu Salmiyya described the attack as a “Massacre targeting the civilians.”

Also, medics provided treatment to five more residents who were injured by shrapnel.

The Israeli Air Force also bombarded three more areas in Gaza City, in addition to bombing lands located northwest of Rafah, in the southern part of the Gaza Strip; no injuries were reported.

On Thursday, the Israeli Air Force assassinated two fighters of the Al Qassam Brigades, the armed wing of Hamas, after firing missile at their car in the centre of Gaza City.

The two fighters were identified as Sobhi Ala’ Al Batsh, 21, and Isam Al Batsh, their bodies were severely mutilated and several bystanders were wounded.

The Ayman Jouda Brigades claimed responsibility for firing shells at Shear Ha-Negev and Eshkol. The brigades stated that the firing of the shells comes in retaliation to the latest Israeli military escalation.