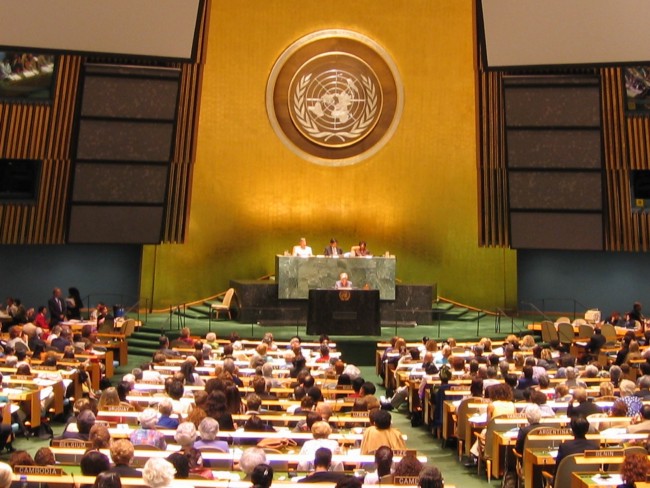 Among these were a resolution that called for an accelerated return of displaced persons who became refugees in 1967, and called on donor countries to assist the United Nations Relief and Works Agency for Palestinian Refugees (UNRWA) in meeting the needs of the Palestinian refugees. This resolution was passed by a vote of 160 in favor to 1 opposed (Israel), with 9 abstentions.

Another resolution urged Israel to reimburse UNRWA for all transit charges incurred and other financial losses sustained as a result of delays and restrictions on movement and access, and to cease obstructing the movement and access of the staff, vehicles and supplies of the Agency. That resolution passed with a vote of 163 in favour to 7 against (Israel, Canada, Federated States of Micronesia, Marshall Islands, Nauru, Palau, United States), with 2 abstentions (Cameroon, Vanuatu).

Of the other Israel-Palestine related resolutions passed by the United Nations General Assembly on Friday, five were part of the report from the Special Committee to Investigate Israeli Practices Affecting the Human Rights of the Palestinian People and Other Arabs of the Occupied Territories, and related to Israel’s practices and obligations as an Occupying Power under the Fourth Geneva Convention.

One of these resolutions demanded that Israel accept the de jure (by law) applicability of the Convention in the Occupied Palestinian Territory, including East Jerusalem, and other Arab territories occupied by Israel since 1967, and that it comply scrupulously with the provisions of the Convention. The text was approved by a recorded vote of 162 in favour to 7 against (Israel, Canada, Federated States of Micronesia, Marshall Islands, Nauru, Palau, United States), with 3 abstentions (Cameroon, Côte d’Ivoire, Vanuatu).

In another of the five resolutions originating from the special committee, the Assembly, bearing in mind the “extremely detrimental” impact of Israeli settlement policies, decisions and activities on efforts to resume and advance the peace process, reiterated its demand for the immediate and complete cessation of all Israeli settlement activities in all of the Occupied Palestinian Territory, including East Jerusalem, and in the occupied Syrian Golan.

It was adopted by a recorded vote of 162 in favour to 7 against (Canada, Federated States of Micronesia, Israel, Marshall islands, Nauru, Palau, United States), with 4 abstentions (Cameroon, Côte d’Ivoire, Panama, Vanuatu).

Since the recommendation that Palestine be split in half to create a Jewish state in 1947, the United Nations has passed hundreds of resolutions on the issue of Israel-Palestine, all of which have been voted against by the Israeli UN delegate. These resolutions have repeatedly called on Israel to adhere to its obligations under international law and the Fourth Geneva Convention. But the UN General Assembly has no enforcement capability to ensure that its resolutions are carried out.

The Palestinian Authority attempted in September to achieve recognition as a state at the United Nations, to be able to participate in proceedings at the General Assembly, but that petition was not approved by the United Nations Security Council.