Mustafa Tamimi murdered by a tear gas canister to the head 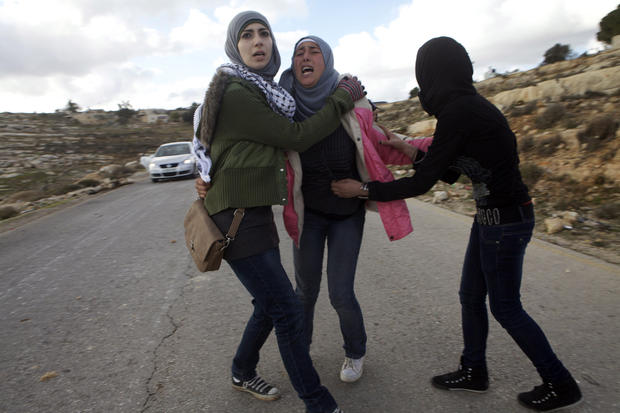 So far, there were three people who had suffocated from the tear gas, and three people injured by rubber bullets. I saw gas, and so assumed that it was another case of suffocation. But the cries got louder, urgent, desperate — quite unlike the previous calls. Along with those around me, we began running to where the injured person lay, 50 meters away.Screams. “Mustafa! Mustafa!”

I ran faster. I stopped. The youth I was so used to, the same ones who were always teasing and joking and smoking, were crying. One turned to me and groaned, “His head. His head is split into two!”

My stomach plummeted and I forgot to breathe. Exaggeration, I thought. Impossible. Not here. More screams of “Mustafa!”

Mustafa’s sister was screaming his name. I saw Mustafa. I saw the blood, the big pool of dark red blood. I saw the blood dripping from his head to the ground as they carried him and put him in a taxi, since the ambulance was nowhere to be found. I saw other the tear-streaked faces of other activists, and all I felt was numbness.

Mustafa’s sister Ola was still screaming, so I put my arms around her as she buried her head in my chest. I was babbling, “It’s ok, he’s gonna be fine, it’s ok” but she kept on screaming. Her screams and the disturbing reactions of those around me made my legs numb. Ola then left to go to the watchtower where the taxi with her brother was, and my state of shock crumbled as I gasped out my tears in the arms of my friend.
The first protester death in Nabi Saleh

Friday, 9 December marked the second year since the tiny village began its weekly demonstrations protesting the expropriation of their land for the neighboring illegal settlement of Halamish, and the confiscation of the village’s main water supply, the Kaws Spring. It also marked the 24th anniversary of the first intifada. Fittingly, it seemed only natural the Israeli army would react with more violence than usual. But never did we expect someone to be killed. It’s too awful to think about. Nabi Saleh has a population of around 500 people. Everyone knows everyone in this tight-knit community, so when one gets killed, a big part of us dies also.

Mustafa, 28 years old, was critically injured after Israeli soldiers fired a tear gas canister at his face, and died at a hospital after his treatment was delayed by the occupation forces who had invaded the village to repress the weekly demonstration.

One difference that distinguishes Nabi Saleh from other villages with popular resistance committees, like Nilin, Bilin, Biddu and Budrus is that no one has been killed, or martyred in the protests. Beaten up, yes. Arrested, ditto. But never a death. Until yesterday.
My humanity is only human

Just before Mustafa went into the operating room, some good news came through. He had not suffered any cognitive damages to his brain, although he suffered a brain hemorrhage. There was a chance his eye might be saved. Relief washed over us. We tweeted, “please #Pray4Mustafa.”

I had pictured myself going to Nabi Saleh the next day, not the following Friday. I had imagined sitting in a room with weeping women, after passing by the somber men sitting outside. I had envisioned a funeral and an inconsolable Ola with her mother. Thank God there was a reassuring chance he would be ok. We’d make fun of his bandaged face, just like we did to Abu Hussam when a rubber bullet hit him under the eye a few weeks ago.

Then I got the call that Mustafa had succumbed to his wounds.

My humanity is only human. I hate my enemy. A deep vigorous hatred that courses through my veins whenever I come into contact with them or any form of their system. My humanity is limited. I cannot write a book titled I Shall Not Hate especially if my three daughters and one niece were murdered by my enemy. My humanity is faulty. I dream of my enemy choking on tear gas fired through the windows of their houses, of having their fathers arrested on trumped-up charges, of them wounded by rubber-coated steel bullets, of them being woken up in the middle of the night and dragged away for interrogations that are spliced with bouts of torture.

The soldiers laughed. They smiled. They took pictures of us, zooming in on each of our faces, and they smirked. I screamed at them: “Nazis, terrorists, vermin, programmed killing machines.”

They laughed at us as we screamed at them to let us through to where he was, unconscious in a taxi near the watchtower. They threatened us if we didn’t go back. We waved the flag with his blood on it in front of them. One of them had the audacity to bat it away. We shouted, “His blood is on your hands!” They replied, “So?”

I thought of Mustafa’s younger brother, imprisoned all these eight months. I thought of that brother’s broken jaw and his subsequent stay in the prison hospital. I thought of Juju (Jihad Tamimi), he of the elfin face who arrested a few days ago with no rights to see a lawyer after being wanted by the army for more than a year. I shuddered to think of the reactions of these imprisoned men from the village — Uday, Bassem, Naji, Jihad, Saeed – once they received the news.

I got the call just after 11pm Friday night. I was sworn to secrecy, since his family didn’t want to make it public yet. Anger, bitterness and sorrow overwhelmed me. I cried at my kitchen table.

The author (left) with Ola Tamimi (center) after Mustafa Tamimi was shot at close range by the Israeli military in Nabi Saleh village.
(
Anne Paq
/
ActiveStills
)

I hate my enemy. I can’t go to sleep. The images are tattooed forever inside my eyelids. They yells, the wailing, the groans, the sobbing all fill my ears like water gushing inside a submarine, dragging me further into a cold dark abyss.

I sought out religion as a source of comfort, yet it didn’t alleviate the anguish. His life was written in al-Lawh al-Mahfooz (The Preserved Tablet) since before he was born. His destiny was to become a martyr. How sweet that will be in the afterlife! But here on this earth, his sister is beside herself. His mother is hurting enormously. Her firstborn gone, no longer to drink the tea she makes or to make her laugh with his jokes.

The images are tattooed forever inside my eyelids. A bloody pulp on one side of his face. The pool of blood rapidly increasing. (Mama, there was so much blood.) His mouth slightly open, lying supine on the cold road. His sister screaming, her face twisted in grief. The young men weeping, looking like little boys again.
I hate them for making us suffer

I can’t sleep. The shock flows in and then dissipates, before flooding back in again. I see no justification is implementing such violence on a civilian population, no sense in the point-blank murder of a man whose rights are compromised, and whose land is colonized and occupied.

Sure as hell, you will not be forgotten. You will become an icon, a symbol, and the added impetus for persisting and continuing your village’s struggle which reflects the plight of the average Palestinian for its basic rights, equality, and justice.

I hate them for making us suffer. Hating them will give me more strength to shatter their barbaric supremacist ideology, and to bring them under the heavy heel of justice. We’ve suffered so much. I hate them for not giving credit to our sumoud (steadfastness), and so continue to kill and dispossess and imprison and humiliate us.

They killed you, Mustafa. My insides crumple. You, in front of me. My tears are drawn from the depth of my wounded soul. You were engaged to be married. You were wanted by the army because of who you are: a Palestinian who resists the occupation he directly suffers from. I think of your father being denied a permit to be with you, of your mother who had to be granted permission by them to see you in the hospital. I think of your quiet, sardonic expression.

Your screaming sister. Your blood. Your murderers’ smiles.

Linah Alsaafin is a recent graduate of Birzeit University in the West Bank. She was born in Cardiff, Wales and was raised in England, the United States and Palestine. Her website is http://lifeonbirzeitcampus.blogspot.com/.