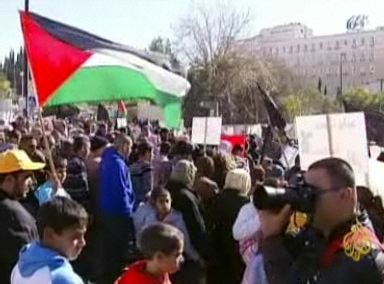 Thousands of Palestinians from the 1948 territories held a protest on Sunday in front of the Jerusalem office of Israeli Prime Minister, Benjamin Netanyahu, to protest the so-called “Brawer-Begin Plan” targeting at least thirty Bedouin villages in the Negev, home to more than 100,000.The protest was called for by the Higher Follow-up Committee that represents the Arabs in historic Palestine. This is the first strike of its kind since the beginning of the Al Aqsa Intifada in 2000, the Qatar-based Al Jazeera reported.

The Prawer-Begin Plan aims at illegally confiscating nearly a million Dunams of Arab – Bedouin land in the Negev, and the total destruction and removal of thirty “unrecognized villages”, an issue that would lead to the displacement of nearly 100,000 persons.

By displacing the Arabs from the Negev, and the construction Malls and “Jewish-only” areas, Israel will be blocking any geographical contiguity between the Negev, Gaza and Sinai.

The plan aims at forcing the Bedouins (approximately 200,000 persons total) in the As-Siyaj area (less than 100.000 Dunams).
Al Jazeera said that head of the Arab Follow-up Committee, Mohammad Zeidan, told its reporter, Waleed Al Omary, that the general strike and the unity in this massive protest, is a message to Netanyahu and his government, informing them that the Negev is for its inhabitants, its native owners, and that the residents refuse to be displaced.

He added that the Arabs in Israel are breathing the atmosphere of “the Intifada of the Land”, and that the Israeli cabinet deals with the Arabs in the country in a colonial mentality, and observes them as a geographic and a security threat
.
Addressing Israeli Prime Minister through Al Jazeera, Zeidan said that “The Nakba of 1948 will not be repeated, and that so-called Prawer Plan is an Israeli attempt to repeat the displacement of the Palestinian people.”

“But, we are here to affirm that we determine our future, in our land,” Zeidan added, “We will either live on our land in dignity, or be buried in its soil as martyrs.”

Several Arab parties in the country warned the Israeli government of the consequences of the displacement plans, and stated that ‘the people are steadfast in their lands, affirming their legitimate right to ownership in the Negev.”

Arab Member of Knesset, Talab Es-Sane’, from an Arab village the Negev, told Al Jazeera that Israel is creating tension in the Negev as it is seeking armed conflict with the Bedouins, an issue that would give Tel Aviv that excuse to evict them.

He added that fundamentalist right-wing parties that dominate the Israeli cabinet are wishing for an armed conflict with the Bedouins in the Negev, as this will issue will grant Israel an opportunity to tell the International Community that the Bedouins, and the Arabs in general, are a security threat.

But he warned that the illegal Israeli measures will lead to a popular uprising in the south, and that this uprising will likely spread to all Arab towns in the country.

Sheikh Siyah At-Toury, head of the Al Araqeeb Bedouin village in the Negev, said that the residents will remain steadfast, and will never leave their historic land despite the fact that Israel demolished the village 32 times this year.

He further stated that the Israeli claims that if Tel Aviv wants to develop the Negev are false, as it wants to remove the Bedouins from the Negev and replace them with Israeli settlements, and shopping centers.

“This is a war against the very existence of the Arab and Palestinian people in the country,” he said, “Nobody has the right to determine our future, any person who compromises on our future is a traitor, a criminal.”

Wasel Taha, head of the National Democratic Assembly, stated that “the battle of the Negev proved the unity of the Palestinians in the country,” and added that “Israel was betting on the failure of the strike and the protest, but it got its answer fast, and our people marched in the thousands.”

He told Al Jazeera that ‘while Israel claims to be the Oasis of Democracy in the region, it is practicing policies of ethnic cleansing, racism and committing crimes against the Palestinian People.”

“Our legitimacy is that we own this land, this country, our country is not a briefcase to be taken away,” Taha stated, “Today we are making history, today is one of the most important days of our struggle for our land, for our people, for our existence.”