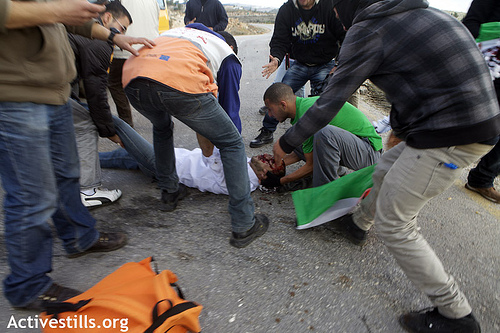 In an official statement by the Israeli military, regarding the shooting of a Palestinian protester in the head with a tear gas canister at on Friday, military officials claimed that the shooter, an Israeli soldier in a jeep “did not see” Mustafa Tamimi when he shot him in the face. On Twitter, Israeli military officials tweeted pictures of a slingshot that Tamimi allegedly had in his possession, along with comments implying that the killing was justified because of the slingshot.Spokesperson Lt. Col. Avital Leibovich re-tweeted a comment made by Israeli army spokesperson, Major Peter Lerner, “What was Mustafa thinking running after a moving jeep throwing stones?”, along with the hashtag ‘#Fail’, and a link to a picture of Tamimi lying on the ground behind a fleeing Israeli army jeep. The major also tweeted a comment asking “Why on earth did Tamimi, a so-called ‘non-violent’ protester have a full-faced mask? What was he hiding?”

These types of comments, posted before any investigation of the incident took place, are unusual for the Israeli military, which usually withholds comments on the killing of Palestinians by Israeli troops in the immediate aftermath of the incident.

Bloggers and online analysts have challenged the Israeli military’s commentaries on the killing of Tamimi. Phan Nguyen wrote on the Mondoweiss blog, “There’s something depressing about laying out a single slingshot for display as if it were a major arms or drugs cache at a press conference,” and questioning the way that Israeli military officials indicted the victim without any investigation of the incident.

Mustafa Tamimi, a 28-year-old Palestinian activist from the village of Nabi Saleh, was critically injured on Fiday, December 9th by Israeli Forces after he was struck in the face by a tear gas projectile. Mustafa was injured during Nabi Saleh’s weekly unarmed demonstrations against the Israeli settlements on village land. These weekly demonstrations are usually met with severe repression by Israeli Forces, who use excessive force resulting in the injuries of dozens, as well as mass arrests.

According to witnesses, Mustafa was critically injured with nearly half his face gone after being hit with the tear gas canister from close range. As medics attempted to evacuate him to a hospital, Israeli Forces initially prevented the ambulance from letting them leave the area.

At a recent military hearing on the shooting of civilians at Nabi Saleh’s weekly demonstrations against the Israeli Wall being constructed on their land, Major Michel Dahan testified that at each week’s demonstrations, after the initial march was dispersed, “a kind of game would begin between the people throwing rocks and the soldiers trying to apprehended as many of them as possible before sunset.”

Human rights groups have criticized the characterization by Israeli officials of their tactics as a “game”, noting that Palestinian lives are at stake.