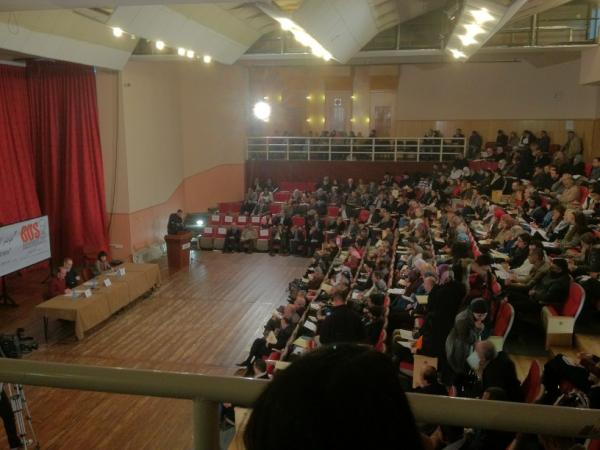 The Palestinian branch of the international campaign for Boycott, Divestment and Sanctions (BDS) against Israel held its third annual conference in the southern West Bank city of Hebron on Saturday, with several hundred Palestinian and international activists gathering for the event.The conference was organized by the BDS Movement in an attempt to expand Palestinian civil society’s active implementation of Boycott, Divestment and Sanctions as an effective and popular strategy of civil resistance that is deeply rooted in the Palestinian struggle. The economic campaign to pressure Israel to change its policies began with a call from hundreds of Palestinian non-governmental organizations in 2005, and gained momentum after the massive Israeli invasion of the Gaza Strip in 2008-9.

According to organizers of the conference, “The conference embodies the unified and determined Palestinian will to secure our legitimate rights, the most important of which are liberation, self-determination and the right of return. It also expresses our gratitude to people of conscience around the world who stand on the side of justice in the face of Israeli occupation and apartheid.”

They focused on issues like resisting ‘normalization’ efforts, which are events, activities and coalitions which aim to normalize the existing system of segregation and discrimination, often under the banner of ‘peace’ or ‘dialogue’ between Israelis and Palestinians. Speakers also targeted Palestinian businesses and business owners in their critique, challenging a recent report that Palestinian business leaders have over $6 billion invested into Israel, much of it in Israeli settlement activity.

The conference encouraged Palestinian activists to work to implement the boycott according to the criteria adopted by Palestinian civil society, particularly in terms of economic disengagement from Israel; and demanding that international institutions and organizations end their complicity in perpetuating Israeli occupation and apartheid.