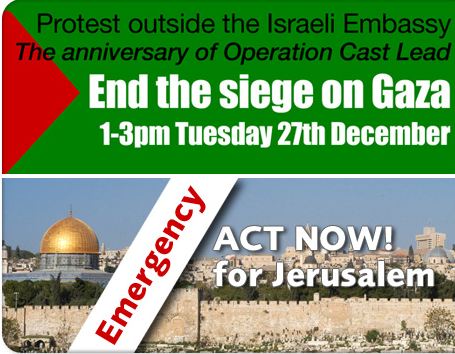 Palestine Solidarity Campaign has denounced the decision by the Lacoste Elysée Prize to exclude artist Larissa Sansour from the final shortlist on grounds that her work is too ‘pro-Palestinian’, despite the museum having originally invited her to join the shortlist.PSC Campaigns Officer, Sara Apps, said; ‘Excluding one of Bethlehem’s foremost artists on the grounds that her work is too pro-Palestinian isn’t much of a present for an artist from the town where Christmas and Christianity was born.

On Tuesday, December 27, 2011, the Palestine Solidarity Campaign will be organizing a protest rally in front of the Israeli Embassy in London.

The protest will be held from 1-3 in the afternoon. It will be held in commemoration 3 Years since the beginning of the 3 week Israeli attack on the Palestinian people in Gaza in December 2008/January 2009, and to protest against the ongoing violence and siege against Palestinians living in Gaza.