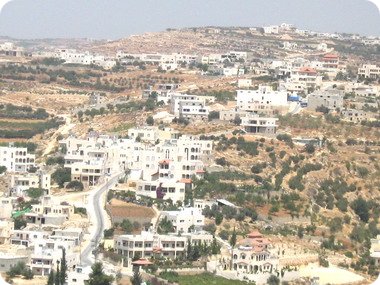 In the fourth Israeli settler attack on a mosque in the past two weeks, Israeli settlers defaced another mosque near the southern West Bank city of Hebron on Monday, and in a separate incident set fire to five Palestinian cars near Ramallah.
In the attack on the mosque, the settlers spraypainted slogans including ‘Pricetag’, which is a common refrain among extremist settlers in the West Bank, and a reference to the idea that Palestinians must all ‘pay a price’ for the dismantling of illegal settlement outposts by the Israeli military. The graffiti also included references to ‘Yitzhar’, a settlement in the northern West Bank where settlers have clashed with soldiers several times over the last year.

The vandalized mosque is located in the Bani Naim area east of Hebron.

Earlier in the day, in the village of Beitin, near Ramallah in the central West Bank, a group of several dozen Israeli settlers stormed the village with guns drawn, frightening local residents and then setting fire to five civilian vehicles in the street.

Israeli settler attacks against Palestinian Christian and Muslim holy sites, as well as the civilian population of the West Bank and Jerusalem, have increased significantly in the last two weeks. In Jerusalem last week, settlers set an ancient mosque on fire, causing severe damage, and spraypainted anti-Muslim graffiti on the walls.

In addition to attacking Palestinian civilians, Israeli settlers also stormed an Israeli army base last week and pelted officers with stones, demanding that the soldiers allow continued expansion of settlements in the West Bank.

All Israeli settlements in the West Bank are considered illegal under international law and the Fourth Geneva Convention.