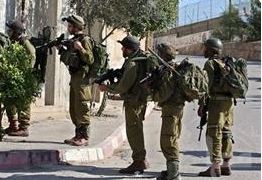 Israeli soldiers kidnapped, on Tuesday at dawn, three Palestinians in the Jenin refugee camp, in Jenin city, in the northern part of the West Bank, and took them to an unknown destination. Soldiers also invaded a number of nearby towns.Eyewitnesses reported that more than ten military vehicles invaded the Jenin refugee camp, broke into and searched several homes and kidnapped three residents identified as Kamal Awwad, 24 years old, Mazin as-Sa’dy, 22 and Yousef Abu as-Siba’, 31.

Soldiers also broke into the home of As’ad Steity, in Jenin refugee camp, and searched it, causing damage to property.

On Tuesday morning, soldiers installed a roadblock at the Jenin-Jaffa road, stopped and searched dozens of vehicles, and checked the ID cards of dozens of residents. No arrests were reported.

In related news, soldiers bulldozed a playground that belongs to the Ibrahimi College, in as-Suwwana neighborhood, adjacent to the eastern side of the al-Aqsa Mosque, in occupied East Jerusalem.