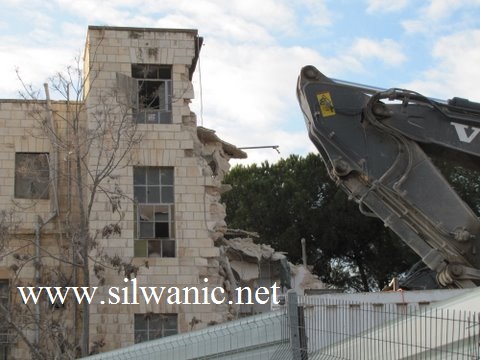 Israeli bulldozers destroyed on Tuesday industrial stalls in ath-Thoury neighborhood, in Silwan, south of the al-Aqsa Mosque, in occupied East Jerusalem, as part of the destruction that is ongoing to a playground that belongs to the Ibrahimi College, a few meters away from the Jerusalem Wall.Israel is trying to remove the Palestinian structures from the area in order to build a National Security College, a project that the Jerusalem Municipality is trying to build on Palestinian-owned lands, including land that belong to the Ibrahimi College.

Eyewitnesses reported that dozens of soldiers, and a number of military bulldozers, surrounded the neighborhood, especially the industrial stalls that belong to resident Montaser Sarhan, before demolishing.

The Jerusalem Municipality recently declared its intentions to confiscate the Palestinian lands in order to build a “parking structure “.