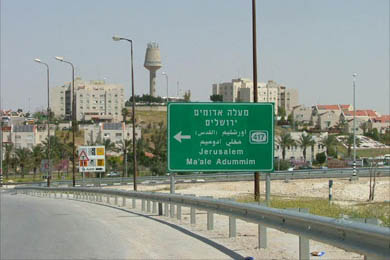 The European Union warned the Israeli government against creating a geographical contiguity between the Ma’ale Adumim settlement and occupied East Jerusalem by constructing a new settlement in the area.E.U. envoy, Andrew Stanley, submitted an official document in this regard to the Israeli Foreign Ministry.

The E.U. said that Israel is demolishing Palestinian homes in Area A, an area Israel intends to use for establishing a settlement that would create a chain between Jerusalem and Ma’ale Adumim.

Stanley stated that the E.U. is extremely concerned regarding the new Israeli plan, and demanded explanations on the issue.

The E.U. stance was made after several of its countries, members of the Security Council, including Germany and Italy, denounced the escalated settlement activities and the sharp rise in settler attacks against the Palestinians and their property in the West Bank and Jerusalem,

Recently, Jerusalem Mayor, Nir Barkat, said that Israel must cede East Jerusalem Palestinian areas that are now behind the Annexation Wall. Such an issue would isolate the residents from their work places, educational facilities, medical facilities and all other aspects of their daily life.

Experts in issues related to the Wall and Settlements stated that all initial indications point to the Israeli intentions to create two networks of roads that would separate Palestinian and Israeli traffic from each other.

The experts also believe that the second network of roads would be used by the Palestinians linking Ramallah with Bethlehem, and in the future linking the southern areas of West Jerusalem with the Jericho area via a bypass road that keeps Palestinian traffic from approaching Ma’ale Adumim.

The E.U. said that such projects would foil any chances for the two-state solution. The United States also expressed its ‘rejection’ to the Israeli plan, adding that the plan would not only block Palestinian geographical contiguity, but also leads to the collapse of the efforts to reach a final status peace agreement.

Israeli daily, Haaretz, report that the E.U. stance was made two weeks ago during a meeting between the 27 member countries of the Union.

The E.U.stated that there is a sharp rise in the number of homes demolished by Israel in area C of the West Bank, and pointed out the deteriorating economic situation of the Palestinian population in the area.

During the meetings, detailed reports submitted by a number of human rights organizations, revealed that Israel intends to remove 2,500 Palestinians from Al Jahaleen area, an issue that raised concerns regarding Israeli intentions to prepare the Palestinian lands in order to be used settlement activities around Ma’ale Adumim settlement.

Two weeks ago, European Commissioner for International Cooperation, Kristalina Georgieva, sent a letter for Israeli Defense Minister, Ehud Barak, expressing her concern regarding the forced eviction of Bedouins from Area 1, and expressing fears that Israel wants to build a new settlement neighborhood in Ma’ale Adumim.

But Israel claims that it is evicting the Bedouins “in order to resettle them,’ and denied any relation between their removal and any settlement activities in the area.
Barkat is trying to officially approve the Annexation Wall as the border of Jerusalem, “the united capital of Israel”.

Israeli daily, Haaretz, reported that a source at Barkat’s office stated that the municipality created a plan to transfer all services provided to Arab neighborhoods that became behind the Annexation Wall, in East Jerusalem, to be run under “Civil Administration”. The Civil Administration is run by the Israeli military.

Israel recently transformed the Shufat roadblock into a border terminal, an issue that effectively removed 70,000 Palestinians out of the boundaries of Jerusalem.

The plan to create the network of roads that would link Ramallah with Bethlehem aims at convincing international powers that that the new plan will not block the geographical contiguity of the Palestinian territories.