Elderly Woman Seriously Injured After Being Attacked by Settlers 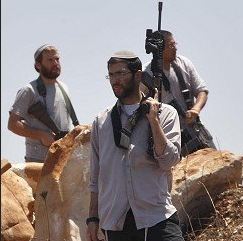 Palestinian medical sources reported Wednesday that a Palestinian woman was seriously injured after a number of fundamentalist Israeli settlers hurled stones at a vehicle on the Yitzhar-Nablus road, in the northern part of the West Bank. The woman, Maysar Abdul-Majeed, 60 years old, was in a vehicle driving in the area when the settlers hurled stones at the car, causing an injury to her head.

She was moved to Rafidia Governmental Hospital in Nablus. Maysar is from Sorra village, west of Nablus city.

The attack is the latest among a series of dangerous escalations carried out by fundamentalist settlers against the Palestinians, their homes and lands in the occupied territories.

The settlers previously attacked the offices and property of Peace Now movement in Israel, and wrote “Price Tag” graffiti on the attacked vehicles and walls of attacks buildings. The settlers blame Israeli leftist and peace groups for any evacuation of illegal settlements in the occupied territories.

Furthermore, the settlers previously burnt several mosques and a church in a number of areas in Palestine.