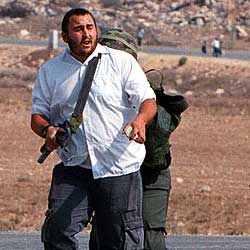 A number of armed Israeli settlers attacked a Palestinian gas station on Tuesday in Jenin, in the northern part of the West Bank, and forced the owners and the residents out. The attacked gas station, Jar Station, is located on the Jenin-Nablus road; no injuries were reported.

Also, the settlers attacked a nearby former settlement outpost that was evacuated by the army.

Soldiers were present during the two attacks and did not attempt to stop them, located sources reported.

In related news, soldiers invaded Jalboun village near Jenin on Tuesday evening, and installed a roadblock south of the city.

On Tuesday at dawn, soldiers kidnapped fifteen Palestinians, mainly from the northern West Bank city of Nablus and its nearby villages and towns, and took them to an unknown location.

Soldiers also installed several roadblocks near Jenin and Nablus, and searched hundreds of vehicles while interrogating dozens of residents.