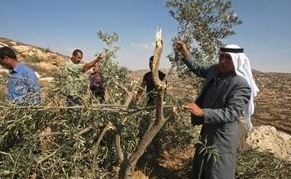 Local sources reported Tuesday that a number of Israeli settlers uprooted nearly 25 newly-planted olive trees that belong to residents of Beit Ummar town, north of the southern West bank city of Hebron.The lands are subject to frequent attacks by the settlers who aim at taking over the Palestinian lands in the area in order to expand their outposts.

Yousef Abu Maria, coordinator of the Popular Committee Against the Wall and Settlements in Beit Ummar, told al-Quds Press news agency that dozens of settlers attacked the area and uprooted the trees while Israeli soldiers, present in the area, did not attempt to stop them.

The land is located in near the illegal settlement of Karmie Tzur, north of Beit Ummar.

Abu Maria added that the settlers have also installed a number of mobile homes in the settlement.

Also on Tuesday, settlers broke into a Christian cemetery in Jerusalem and defaced several graves using spray paint to right racist graffiti, including “Death to Christians”.

“Death to Arabs” and “Mohammad is a pig” graffiti was also found on the wall of a bilingual school in the city.

Settlers also attacked a gas station in Jenin, in the northern West Bank city of Jenin, forcing the residents out.