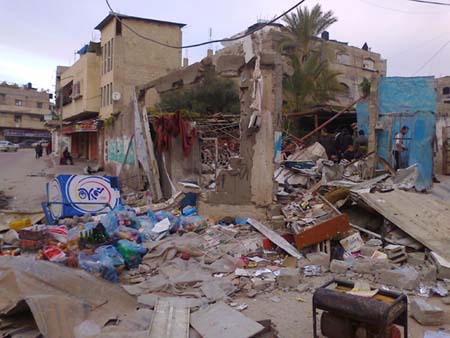 In its Weekly Report On Israeli Human Rights Violations in the Occupied Palestinian Territories for the week of 02 – 08 Feb. 2012, the Palestinian Center for Human Rights found that 11 Palestinians were wounded by Israeli forces this week, including 4 children.In addition, Israeli forces destroyed four buildings, and damaged 28 houses, 2 shops, a legal firm, a sports club, a school and 4 civilian cars in Gaza; and abducted 25 civilians in 47 incursions in the West Bank.

In the Gaza Strip, Israeli forces warplanes attacked civilian targets, including residential houses. As a result, three civilians, including 2 children, were wounded by glass shrapnel, a woman suffered nervous trauma and another woman sustained wounds in the foot. The airstrikes also resulted in the destruction of an agricultural shed, a shop, several warehouses and a tunnel. Additionally, the strikes resulted in damage to 28 houses, 2 shops, a legal firm, a sports club, a school and 4 civilian cars.

At approximately 01:10 on Friday, 03 February 2012, Israeli forces warplanes fired a missile at a tunnel in Yebna refugee camp near the border between Egypt and the Gaza Strip, south of Rafah. The targeted tunnel was totally destroyed and civilians were in panic as a result. No casualties were reported.

At approximately 01:15 also on Friday, 03 February 2012, Israeli warplanes fired a missile at house in al-Shoka village, east of Rafah. The missile hit a tin-roofed room in the front yard of the house. The room was totally destroyed. No casualties were reported.

At approximately 01:39 on Friday, 03 February 2012, Israeli warplanes fired a missile at a farm in al-Zanna area, east of Khan Younis in the south of the Gaza Strip. No casualties were reported.

At approximately 01:50 on Friday, 03 February 2012, Israeli warplanes fired a missile at a piece of land in the east of al-Nusseirat on Salah Addin Street in the middle of the Gaza Strip. A room built on the targeted land was destroyed and four neighboring houses were damaged as a result.

At approximately 02:15 on Friday, 03 February 2012, Israeli forces warplanes fired a missile at a grocery shop measuring 35 square meters in Beit Lahia in the north of the Gaza Strip. Three civilians, including two children, were wounded by glass shrapnel from windows crushed in their houses as a result of the attack. The targeted shop was totally destroyed. Additionally, 13 neighboring houses, 2 shops, a law firm and 4 civilian vehicles were damaged.

At approximately 02:45 on Friday, 03 February 2012, an Israeli drone fired a missile at the roof of the house of Awad Ali al-Abed Meqdad, 46, near Jabalia al-Nazla Boys Elementary School, north of Jabalia in the north of the Gaza Strip. As a result of the attack, a part of the roof collapsed, some of the windows in the targeted house broken and a 1000 liter water tank was destroyed. No casualties were reported.

At approximately 02:50 on Friday, 03 February 2012, Israeli forces warplanes fired a missile at a warehouse in the house of Ammar Abu Warda, 35, north of Jabalia in the north of the Gaza Strip. The warehouse was totally destroyed and the house was heavily damaged as a result of the attack. Another 8 neighboring houses sustained damages. Additionally, the eastern external wall of Jabalia al-Nazla Sports Club was totally destroyed and some windows of Jabalia al-Nazla Boys Elementary School crushed. Najah Ibrahim Abed Safi, 52, suffered nervous trauma as she was in her house which is to the east of Abu Warda’s house. Muna Yousif Ali Ghanim, 37, sustained light wounds in the left leg.

At approximately 19:05 on Tuesday, 07 February 2012, Israeli forces warplanes opened fire at open areas in Abu Rahma area in the north of the Agricultural School, north of Beit Hanoun. No casualties were reported as a result of this indiscriminate firing.

Also in the Gaza Strip, on 04 February 2012, Israeli forces positioned at the border fence in the east of al-Bureij refugee camp in the middle of the Gaza Strip abducted three Palestinians who were trying to infiltrate Israel apparently to seek work. The families of the abducted Palestinians called the International Committee of the Red Cross (ICRC) telling them about the relatives being missing. Later, ICRC told the calling families that their relatives were abducted by Israeli forces. It should be noted that Palestinian young men try to infiltrate Israel to seek work.

In a provocative operation on 04 February 2012, Israeli forces moved into ‘Arraba village, southwest of Jenin. They patrolled in the streets for some time and then positioned themselves in the eastern neighborhood, near a tent erected by Palestinians in solidarity with Khader Adnan Musa, a Palestinian prisoner holding an open-ended hunger strike in an Israeli jail. Israeli forces raided the tent and removed some of the solidarity banners, flags of the Islamic Jihad movement and Musa’s photos. They confiscated some of these materials and tore up others. Later, Israeli forces raided houses near the eastern mosque. Palestinians living in these houses are actively engaged in the activities held in the solidarity tent. Israeli forces questioned people from the raided houses. Israeli forces withdrew later and no arrests were reported. It should be noted that the health condition of Musa, who is a prominent leader of Islamic Jihad in Jenin, has deteriorated as he has been on hunger strike since 17 December 2011. Semi-official sources reported that Israeli forces are intentionally taking Musa from one hospital to another in order to hinder any contacts between Musa and his lawyers. A number of Palestinian prisoners in Israeli jails have begun hunger strike in solidarity with Musa and Palestinian lawyers have refrained from attending sessions in Israeli courts in protest against the continued detention of Musa.

Israel has continued efforts to create a Jewish majority in East Jerusalem. Israeli forces bulldozed 20 dunums, 3 natural caves, 2 walls and a dust road in al-Tour village, east of Jerusalem. A Palestinian family was forced by Israeli forces to demolish a flat and 2 shops belonging to the family.

At approximately 08:30 on Thursday, 02 February 2012, Israeli forces bulldozers started to raze lands in the north of Jayous village, northeast of Qalqilya, with the aim to annex these lands to ‘Tsufim’ settlement which was established in 1992 on the lands of Jayous village. The bulldozed lands, which measure around 30 dunums, are owned by Fahmi Hussein Slim.

During the reporting period Israeli settlers, protected by Israeli forces, implemented 7 attacks in Hebron, Nablus, Qalqilya, Ramallah and the Jordan Valley. The attacks were concentrated in Hebron and included attacks on mosques, religious and archaeological places, farms and civilian property. Israeli settlers attacked Mahdi Daraghmeh, 24, in the Jordan Valley near Tubas, while grazing cows. Daraghmeh was transferred to hospital for treatment.

Israeli forces bulldozed lands in Kafr Qaddoum village with the aim to annex these lands to nearby settlements.

Israeli forces used excessive force to disperse peaceful demonstrations organized in protest to Israeli settlement activities and the construction of the annexation wall in the West Bank. As a result, 7 protesters, including a child and a French solidarity activist, were wounded in al-Nabi Saleh weakly protest, northwest of Ramallah. Additionally, dozens of Palestinian civilians and human rights defenders participating in peaceful demonstrations suffered from tear gas inhalation. Israeli forces also held Ali Dar Ali, 27, a reporter for Palestine TV, and Najib Allah Hussein Sharawna, 23, a cameraman of Palestine TV, in a military jeep for 4 hours.

Following the Friday Prayer on 03 February 2012, dozens of Palestinian civilians and international and Israeli human rights defenders organized a peaceful demonstration in Bil’in village, west of Ramallah, protesting the construction of the annexation wall and in support of efforts to achieve national reconciliation between Hamas and Fatah movements. They raised the Palestinian flag and called for ending the political division. They then moved towards areas of Palestinian land, which the Israeli High Court ordered to be returned to their Palestinian owners. Israeli soldiers stationed in the area fired rubber-coated metal bullets, sound bombs and tear gas canisters at the demonstrators. As a result, a number of civilians suffered from tear gas inhalation. Israeli forces also held Ali Dar Ali, 27, a reporter for Palestine TV, and Najib Allah Hussein Sharawna, 23, a cameraman of Palestine TV, in a military jeep for 4 hours.

Also following the Friday prayer on 03 February 2012, dozens of Palestinian civilians and Israeli and international human rights defenders gathered in the center of al-Nabi Saleh village, northwest of Ramallah, to start the weekly peaceful protest against the construction of the annexation wall and settlement activities. The protesters walked towards the gate erected by Israeli forces near the entrance of the village and leading to Palestinian lands that Israeli settlers from the nearby ‘Halmish’ settlement are trying to seize. Israeli soldiers, who had been extensively deployed in the area and near all the entrances of the village since the morning, began to confront the protesters who wanted to walk towards the affected lands. Israeli soldiers fired live and rubber-coated bullets, sound bombs and tear gas canisters at the protesters. As a result, 7 protesters, including a child and a French solidarity activist, were wounded. The French solidarity activist sustained wounds by a tear gas canister to the head and she was transferred to Palestine Medical Compound in Ramallah for treatment. Additionally, dozens of Palestinian civilians and human rights defenders suffered from tear gas inhalation.

Also following the Friday Prayer, on the same day, dozens of Palestinian civilians and international and human rights defenders organized a peaceful demonstration in Ni’lin village, west of Ramallah, in protest against the construction of the annexation wall. They chanted slogans calling for Palestinian reconciliation, adherence to the Palestinian inalienable rights and resistance of the occupation. They clashed with Israeli troops positioned near the annexation wall. Israeli soldiers fired rubber-coated metal bullets, sound bombs and tear gas canisters at demonstrators. As a result, a number of demonstrators suffered from tear gas inhalation.

Also following the Friday Prayer, at approximately 12:20 on the same day, dozens of Palestinian civilians and international and human rights defenders organized a peaceful demonstration in Kafr Qaddoum village, northeast of Qalqilya, in protest against closing the eastern entrance of the village. The demonstrators headed towards that entrance. Israeli soldiers fired sound bombs and tear gas canisters at them, leading a number of demonstrators to suffer from tear gas inhalation.

In addition, the PCHR called upon the European Union to activate Article 2 of the Euro-Israel Association Agreement, which provides that Israel must respect human rights as a precondition for economic cooperation between the EU states and Israel. PCHR further calls upon the EU states to prohibit import of goods produced in illegal Israeli settlements in the West Bank.