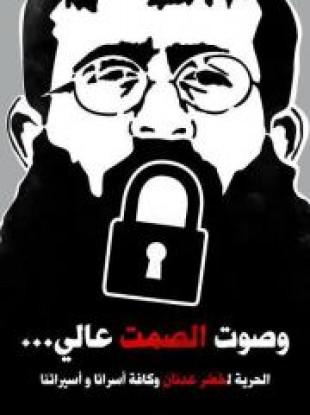 As 33-year old Khader Adnan continues his 56-day hunger strike in an Israeli prison, a group of supporters held a rally on Saturday afternoon outside the prison, but were attacked by Israeli troops firing rubber-coated steel bullets and tear gas. A separate protest in the southern West Bank was also attacked.Around 100 Palestinians gathered outside the Ofer military base near Beituniya village in the central West Bank, where Khader Adnan was held without charge since December 17th until he was transferred to the hospital due to his hunger strike. They chanted slogans and marched with pictures of Adnan and other prisoners. Signs included, “Our dignity is more important than food” and “Wake up before I die”. Adnan’s father also joined the protest, after having begun a solidarity hunger strike on Monday.

In Beit Ummar, in the southern West Bank, Israeli troops attacked a protest of around two dozen supporters of Adnan, who called for his release. According to the Popular Committee Against the Wall, two men were injured: Yousef Abu Mariya, 38, who was beaten by Israeli soldiers in the head, and Saqer Abu Mariya, 41, who suffered a severe reaction to inhaling tear gas.

Two Palestinians and two Israeli supporters were detained by Israeli troops at the protest in Beit Ummar.

Adnan’s wife was allowed to visit him this week in Safad hospital for the first time since his abduction in December. She told reporters with Al Jazeera, ‘A lot of the hair on his face and head has fallen off. He has not been allowed to shower or wash during all his time in detention, nor is he allowed to wear warm clothes in this cold weather.’

According to his wife, Adnan could soon face organ failure due to a lack of food. He is being force-fed liquid and potassium pills by the Israeli prison authorities, but his wife reported that a prison doctor “mocked him when he asked for water and said that he should also stop drinking water’.

Palestinian and international supporters of the striking prisoners have criticized the lack of media coverage of the hunger strike, particularly in the Arab media. This week, they launched a call-in campaign to the English-language bureau of Al Jazeera news network, which then published its first article on the topic. But the article discounted the claim that Adnan’s life is in danger, with a headline that stated ‘Adnan’s “life is in danger”’, leading to further criticism of the network. One supporter who called Al Jazeera to ask that they provide coverage of Adnan’s hunger strike was told, “With all due respect, it’s not up to you to tell us what to cover. I’m only accountable to my superiors in Doha”, and that the story of a person voluntarily going on hunger strike for 56 days and counting was not important because, “There are people dying everywhere”.