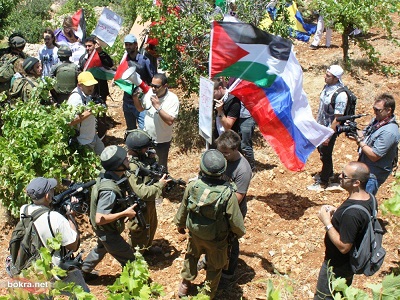 Israeli troops attacked on Saturday the weekly nonviolent protest against the Annexation Wall and settlements, in Beit Ummar town, near the southern West Bank city of Hebron; four protestors were kidnapped, several others were wounded. The protestors, accompanied by international and Israeli peace activists, conducted their peaceful weekly protest, and chanted slogans demanding Israel to release detainee Adnan Khader who has been on hunger strike since more than 56 days, and his health condition is sharply deteriorating, the Maan News Agency reported.

Ahmad Abu Hashem, secretary of the Popular Committee Against the Wall, stated that this protest comes to express solidarity with Khader, and with all Palestinian detainees illegally held in Israeli prisons and detention facilities.

Israeli soldiers attacked the protestors with batons, rifle-butts, and fired gas bombs and rubber-coated metal bullets at them before kidnapping four.

One of the kidnapped, Yousef Abu Maria, 38, was violently beaten and kicked by the soldiers, and was kidnapped despite the fact that he was bleeding.