Troops Detain Five Residents at a Settlement Near Jenin 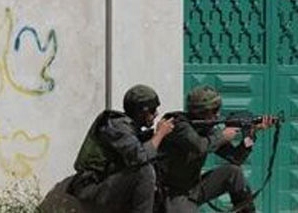 On Sunday evening, Israeli soldiers kidnapped five Palestinian residents from Ya’bod village, south of the northern West Bank city of Jenin, and held them for several hours at the Mabo Dothan settlement, in the Jenin district.The Palestine News and Info Agency, WAFA, reported that the army broke into a construction site in Ya’bod, kidnapped the five residents and took them to the illegal settlement that was built on lands that belong to residents of the town.

The four were identified as Ahmad Imad al-Keelany, 23 years old; Firas Sibhi Abu Bakr, 24; his brother Mohammad, 22; and Mahran Waleed Abu Bakr, 26. They were all interrogated at the settlement for several hours before being released.

In related news, clashes were reported on Sunday evening when Israeli soldiers invaded al-Yamoun town, near Jenin, and fired rounds of live ammunition, gas bombs, and rubber-coated metal bullets. No injuries were reported.

Also on Sunday evening, soldiers stopped and searched dozens of vehicles near Qabatia town, ash-Shuhada’ Intersection, and Be’er al-Basha, near Jenin, and inspected the I.D. cards of dozens of residents.

In Hebron, in the southern part of the West Bank, a number of extremist Israeli settlers, of the Keryat Arba’ settlement in the city, attacked several Palestinian vehicles and hurled stones at them causing damage.