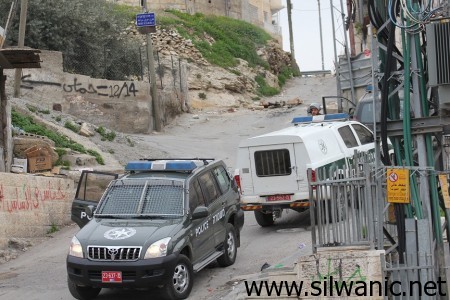 Israeli bulldozers from the Jerusalem Municipality destroyed a playground on Monday morning, in the Wadi Hilweh area, in Silwan of East Jerusalem, and also removed the protest tent in Silwan.Representatives of the so-called “Natural Gardens” Authority, accompanied by officials of the municipality, invaded the area and ordered the bulldozers to destroy the playground, local sources reported.

Furthermore, the municipality also removed the protest tent that was installed by the indigenous Palestinian inhabitants of Silwan in 2007 to protest the illegal takeover of Palestinian homes by extremist groups that fund the illegal Israeli settlement activities.

Dozens of policemen surrounded the area and instigated a closed military zone, before removing the tent, the WAFA news agency reported.

Palestinian residents of Jerusalem are subject to frequent violations, including home demolitions, and home takeover by extremist settlers.

While the illegal settlement construction and expansion is taking over most of the Arab areas in and around occupied East Jerusalem, Palestinian residents are unable to build homes, or expand existing ones, due to Israeli restrictions.

Soldiers violently broke into the building and pushed Dary while he was carrying his 2-year-old son; the father fell on his son and both were moderately injured.

Soldiers also used pepper-spray against the family, and attacked the father with taser-guns until he collapsed, and then proceeded to violently attack his wife who was seriously injured, and was admitted to the Intensive Care Unit at the Hadassah Hospital in Jerusalem.