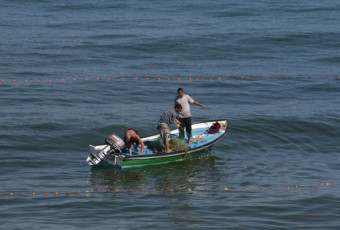 As part of its siege on the coastal region, Palestinian fishermen are facing further and more serious restrictions on their right to fish in Palestinian waters.

Restrictions on the fishing zone are of considerable significance to Palestinian livelihood. Initially set at twenty nautical miles, it is presently often enforced between 1.5 – 2 nautical miles (Palestinian Center for Human Rights, PCHR: 2010). The marine ‘buffer zone’ restricts Gazan fishermen from accessing 85% of Gaza’s fishing waters which was agreed to by Oslo.”

The fishing community is often similarly targeted as the farmers in the ‘buffer zone’, and the fishing limit is enforced with comparable aggression, with boats shot at or rammed as near as 2nm to the Gaza coast by Israeli gunboats.

The “buffer zone” is a no-entrance zone Israel has enforced on all areas in the Gaza Strip that are close to the border.

Most of these areas are farmlands, an issue that devastated the families that depend on farming as their only source of livelihood. Dozens of casualties were reported when the army opened fire at farmers working near the border.