Four Injured After Troops Break into Palestinian Home in Jerusalem 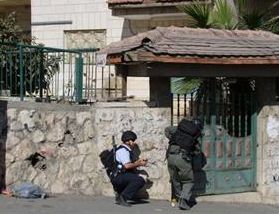 Palestinian medical sources in Jerusalem reported that four residents were wounded on Sunday evening, when Israeli troops and policemen broke into a Palestinian home of a former political prisoner, in al-Isawiyya town, in East Jerusalem.Eyewitnesses said that the army broke into the home of former political prisoner, Samer al-Eesawy, by smashing the main door, and attacked his relative, lawyer Shereen al-Eesawy, her mother Laila, and her brother Shadi.

The lawyer suffered fractures in her arm and leg, and was taken prisoner by the police. Her mother was moved to the Hadassah Hospital in Jerusalem suffering bruises in the neck, and a fracture in her arm, the Palestinian Information Center reported.

Also, resident Rami Ismat was shot by a rubber-coated metal bullet fired by the army while invading the town. He was also moved to Hadassah Hospital.

It is worth mentioning that in October of last year, Samer al-Eesawy was released under the prisoner-swap deal that secured the release of Israeli soldier, Gilad Shalit, in exchange for the release of over a thousand Palestinian prisoners.