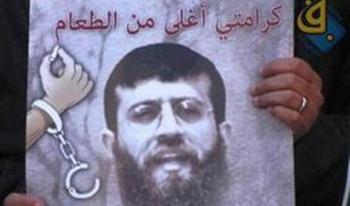 The Palestinian prisoner Khader Adnan has been on hunger strike for 59 days demanding his immediate release. Khader Adnan refused food one day after being kidnapped by the Israeli military from his house on December 17, 2011.Adnan is a 33-year old Palestinian baker, husband and a father, who have decided to pay a high price for his freedom, which could be his death.

Several rallies have been organized in various parts of the Wes Bank in solidarity with Adnan, while others are on hunger strike at the red cross and red crescent societies to support Adnan in his fight for freedom.

On his part, chief Palestinian negotiator, Dr. Saeb Ereikat, called upon the International community to intervene to release Adnan.

Adnan, has been hospitalized as his health condition is deteriorating and he insists on rejecting any medication until he is released.

Ereikat held Israel responsible for the life of Adnan and stressed the need for intervention to pressure Israeli to release him in order to save his life.

According to Mondo Weiss ‘Fifty-nine days was how long it took for Francis Hughes to succumb to his starvation and die. Hughes was one of ten Irish republican prisoners who died during the 1981 hunger strike, calling for the British government to recognize their status as political prisoners.’

Adnan’s vital organs are in a stage that could cease to function at any time.