Sniper Fire in the ‘Buffer Zone’ 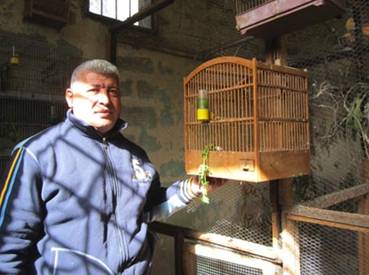 Goldfinches and canaries are appreciated worldwide for their colourful appearance and their melodic whistling. The birds are especially popular in the Gaza Strip as they help to create a distraction from the hardships of daily life.

Munther Rashad Saleh al-Nakhala, 44, lives in Gaza city. He is widely known by his neighbours for his success in raising canaries and goldfinches and for the care and attention he shows them. At present, he owns more than 50 birds, and although they sell for up to 1,000 NIS in the Gazan market, he refuses to sell them. “I have built special cages for them so I simulate their natural environment. They are very precious for me.”

Munther enjoys hunting goldfinches and canaries with his green net and a small wooden cage. Four days a week for the last seven years, he has taken his bicycle to go hunting in the neighbouring areas of Gaza city. In the Gaza Strip, however, such a simple hobby has put his life at risk. On the morning of 31 January 2012, Munther was shot three times by Israeli soldiers.

On that day, he was hunting in the Shajaiyeh area, approximately 450 meters from the Eastern fence that separates Gaza with Israel. When he had already extended his net on the ground, he noticed five soldiers walking along the Israeli side of the fence. “I know that the occupation soldiers approach the fence by foot when they attempt to shot at someone.

Immediately, I started collecting my net and cage to leave the place. As I was taking the cage, without notice, the soldiers fired three times at me with live ammunition. One of the bullets hit my left leg. Injured, I took my bike and run away as fast as I could.” Luckily, the bullet exited Munther’s leg without leaving serious injuries. However, he needed to spend two days in Al Shifa hospital and is still under medication.

“We are hunting in our lands, they [Israeli soldiers] know me and they knew that I was unarmed as I have been hunting in that area for years. They call us terrorists when they are the ones who terrorise us.”

Since Israel’s disengagement from the Gaza Strip in September 2005, Israeli forces have established a ‘buffer zone’, an area prohibited to Palestinians, along the land and sea borders of the Gaza Strip. The precise areas designated by Israel as ‘buffer zones’ are unknown and changing. Israeli policy is typically enforced with live fire. At a minimum, the ‘buffer zone’ is established at 300m from the land border, but it can extend to over 2km.

The establishment of a so-called ‘buffer zone’ is illegal under and international law; there is no military necessity associated with the establishment of permanent ‘closed military areas’ inside the Gaza Strip. This effective confiscation/seizure of property violates Article 23(g) of the Hague Regulations, and constitutes a grave breach of the Geneva Conventions.