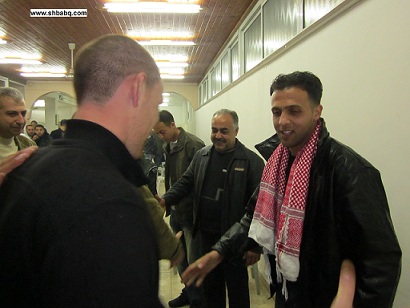 Journalist Ya’qoub al-Hotary was released, on Friday, from an Israeli detention facility after spending eight years in different Israeli detention centers for his journalistic and political activities.The Ma’an News Agency reported that al-Hotary worked as the Sound Engineer at Qalqilia T.V., in Qalqilia, in the northern part of the West Bank.

The charges against him were never clear, but included his political affiliation with the leftist Popular Front for the Liberation of Palestine (PFLP).

Hundreds of residents welcomed the released journalist by marching in the streets while carrying Palestinian flags and posters calling for the release of ailing detainee Khader Adnan, who is facing serious health complications following 62 days of hunger strike. Adnan has been held under administrative detention without charge.

An Israeli court rejected on Monday, February 13, the appeal that was filed by the Palestinian Prisoner Society (PPS) and ordered that he remain under administrative detention, without charges, for additional four months.