Thousands Protest In Support Of The Political Prisoners 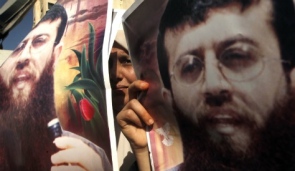 Thousands of protestors rallied in the Gaza strip and the West Bank on Friday in support of Islamic Jihad leader Khader Adnan who was jailed by Israel, and is ongoing with his hunger strike for the 62nd day, despite his bad health condition.
‘We are all Khader Adnan’, the protestors chanted in Gaza, ‘Free All prisoners Zionist prisons’.

“We will continue our resistance, and we will sail in a sea of blood and martyrdom until we land on the shore of pride and dignity”, top Islamic Jihad leader Nafeth Azzam declared during Friday prayers at a mosque in Gaza.

It is worth mentioning that Physicians for Human Rights, Israel Branch, stated that Adnan is in an “imminent danger of death”, adding that even if Adnan broke his fast now, and started to eat, there will still be a risk to his health because his biological system is now used to not having food at all.

Palestinian officials said that other prisoners had started hunger strike in solidarity Adnan, including Hassan Salama, a senior armed commander of Hamas who is serving a life sentence allegedly for masterminding suicide bombings against Israel.

On his part, Ismail Haniyya, head of the dissolved Hamas-led government in Gaza, stated that “the Palestinian people, and all of their factions, will never abandon the detainees, especially those who lead battle of empty bowels’.