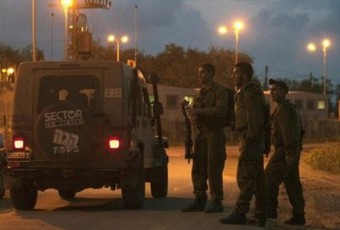 Israeli troops invaded, on Tuesday afternoon, Al-Khader town, west of the West Bank city of Bethlehem, and fired rubber-coated metal bullets and gas bombs at dozens of youth who hurled stones and empty bottles at them.The soldiers also attacked dozens of bystanders, and violently struck and beat a 15-year-old, youth identified as Issa Yousef Sbeih, before kidnapping him and taking him to an unknown destination.

In related news, soldiers kidnapped, on Tuesday at dawn, three Palestinians who approached the border fence area, east of Rafah, in the southern part of the Gaza Strip.

Israel enforces a no-man zone in areas that are close to the border, an issue that prevents hundreds of residents from entering their own farmlands.

Several casualties were reported when Israeli troops opened fire, and even fired shells, at residents who approached the “no-man” zone.