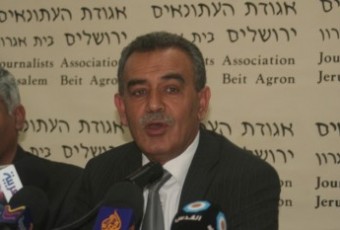 Arab Member of Knesset (MK), Jamal Zahalka, of the National Democratic Assembly, strongly denounced the statements of Israeli Foreign Minister, Avigdor Lieberman, who attacked Arab members of Knesset, and stated that “they turned their parties into representatives of terrorist groups at the Knesset”.Lieberman attacked the Arab MK’s who visited the ailing detainee Adnan Khader who ended on Tuesday his 66 days of hunger strike after Israel decided to release him on April 17th.

Lieberman said that the “Arab MK’s betrayed Israel, by defending representatives of the Islamic Jihad, and remained silent over the killing of thousands of protestors in Syria”.

Responding to Lieberman’s statements, MK Zahalka said that “Lieberman should be thanked for being frank, and for showing the true face and nature of Israel that wears the mask of democracy to cover its ugly face of racism”.

“We cannot consider Lieberman as a minor issue, he has 15 members of Knesset who support him, he can topple the Israeli government whenever he wishes”, Zahalka added, “He is the Foreign Minister who plays an important role in Israeli politics; the world must know that the racism of Lieberman shows the true nature of racism in Israel, all what we need to do is to translate his statements, as they are, from Hebrew into English”.

Zahalka further stated that “Lieberman’s statements against the Arab MKs are very serious and dangerous as he is using the word betrayal, and accuses them of representing terrorism at the Knesset; such statements are a call to attack the Arab MK’s, but this hatred and racism makes us more determined to achieve and maintain our rights”.