Troops kidnap A Former Detainee, His Wife And Daughter 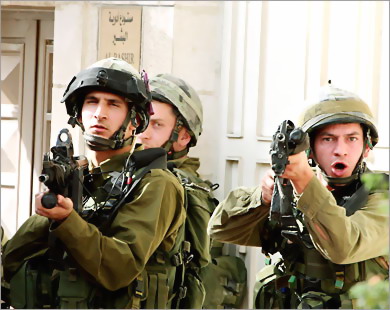 Palestinian security sources reported that Israeli soldiers kidnapped, on Wednesday at night, former political prisoner, Majdi Al-Ajouly, in addition to his wife and underage daughter, in Foqeen village, near the northern West Bank city of Tulkarem.The sources added that at least 6 armored military vehicles invaded the village, and surrounded the home of Al-Ajouly before breaking into it and kidnapping him, his wife and underage daughter, the Maan News Agency reported.

Al-Ajouly is one of the detainees, who were released under the Shalit prisoner-swap deal that was brokered and implemented under Egyptian mediation several months ago.

On Tuesday, the army kidnapped former political prisoner Yousef Abdul-Rahman Eshtewey, from the northern West Bank city of Qalqilia, and Mahmoud Adnan Salim, who was also among the detainees who were released under the prisoner-swap deal.

The Shalit deal was reached in October 2011, and was implemented on two phases; the resistance in Gaza handed Corporal Gilad Shalit to Egypt, and Israel released 1027 detainees.

Since then, soldiers kidnapped hundreds of detainees, including several detainees who were released under the swap-deal, in addition to several children, especially in occupied East Jerusalem.