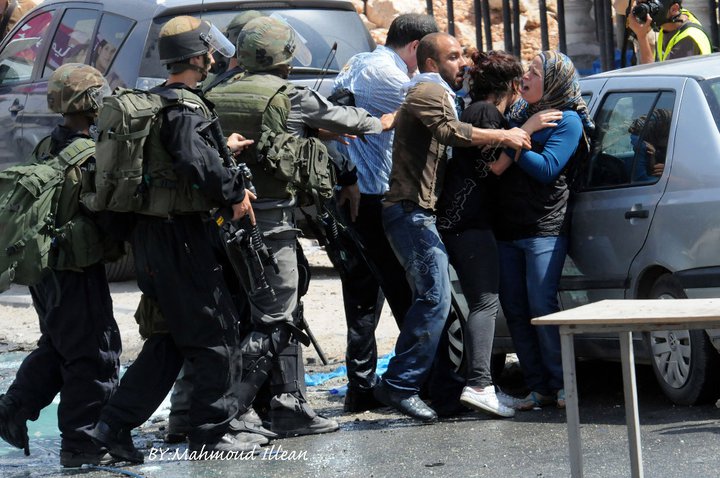 The situation of Palestinian political prisoners held in Israeli jails gets very little coverage in the mainstream media, in contrast to political prisoners in other parts of the Middle East and beyond. The reported arrests of Palestinian MPs, Mohammed Totah, Khaled Abu Arafeh, Aziz Dweik, or the current detention term of hunger striking prisoner Khader Adnan are only the most recent cases in Israel’s ongoing campaign of arrests across the occupied West Bank.

Why this subject goes under-reported by the established media? And why the political status of Palestinian prisoners is still ignored in the press today?

Anat Matar, senior lecturer in philosophy at Tel Aviv University, sees the main problem in the reporting by international media being largely based on Israel’s perspective, which in turn tends to silence the issue. “I have been involved in many political activities in the last 40 years, certainly the least popular subject in Israel is that of Palestinian prisoners”, she observes.

Ms Matar, who also chairs the Israeli Action Committee for Palestinian Prisoners, points out that Palestinians are presented in the Israeli press as ‘security prisoners’, rather than political, and portrayed by the mainstream media as ‘criminals’.

In her view, this tag used by Israel for Palestinian prisoners, seen as a threat to its security, is crucial in that it denies their political nature justifying Israel’s need for self-defence and its mass detention policy. “When I insist on calling Palestinian prisoners ‘political’, it brings so much criticism from the Israeli society, they don’t want to acknowledge this”, Matar explains.

Murad Jadallah, legal researcher at Addameer -Prisoner Support and Human Rights Organization, suggests that the media tend to wrongly report the situation in Palestine as if it was a post-conflict scenario. “We still live under military occupation. Israel detains up to 7,000 Palestinians every year, with an average of 11 to 20 Palestinians arrested every day. There are 123 veteran prisoners kept in Israeli jails since before the Oslo accords”, Jadallah states.

Abeer Baker, private human rights lawyer and public defender in prisoners cases, maintains that prisoners issues attract limited media attention, and this is particularly true for Palestinians. “It is obvious that, with very rare exceptions, the public opinion will never be interested to hear about these thousands of people”, she stresses.

Ms Baker also explains the justification for Israel’s denial of the political nature of imprisonment. “To acknowledge this would mean admitting that Palestinians are fighters for justice and self-determination. Criminalizing Palestinians, instead, turns them into ‘terrorists’ making the Israeli people feel like persecuted victims forever”, the human rights lawyer concludes.

Israel’s attitude to criminalise and de-politicise Palestinian prisoners is then reflected in the mainstream media.

The prisoner exchange deal between Hamas and Israel, reached earlier last year, was the first time that we saw intensive media coverage on Palestinian prisoners.

Ms Baker, also former senior lawyer with Adalah -Legal Centre for Arab Minority Rights in Israel, criticizes the news reporting throughout that period. She recalls the media were busy covering the case of Israeli soldier Gilad Shalit rather than the one thousand Palestinian prisoners, and focussing on certain prisoners and their crimes.

“The impression was that nobody from the media could stand the idea that political prisoners were released. The stories of these prisoners, their families, and what they had faced during the years in jail were totally ignored”, Baker comments.
Ms Matar similarly highlights the unbalanced reporting by the major media.

“Palestinian prisoners themselves were treated by the international media as masses, not individually and not politically”, she stresses. Jadallah reminds there are still at least 4,500 Palestinians in Israeli jails, and condemns the media in never mentioning about the more than 8,000 Palestinians who have been detained by Israel since 1967.

“Last year, Addameer documented that over 3,700 Palestinians were arrested, and in 2010 only in Silwan more than 1,200 children were rounded up by Israeli forces, some of them several times”, the legal researcher also reports.

Based on Addameer’s media monitoring, as part of its advocacy work, the response from the mainstream media proves to be largely disappointing. “We invite foreign journalists to military courts so they can attend trials on cases of political prisoners, and report what they witness, but in many instances they refuse to go”, Jadallah denounces.

Similarly, Matar urges more involvement from the foreign media in covering trials concerning organisers of demonstrations. “If they wanted, they could go and draw attention on their cases. Very often, I have seen several EU representatives attending trials, but I don’t remember ever seeing international media there”, the philosophy lecturer emphasizes.

One striking example of media neglect, which Jadallah remembers well of, goes back to 2010, when Addameer documented five sexual cases of abuse by Israeli soldiers against Palestinian child detainees. “We issued a report on our website, I myself contacted the BBC, and they refused to cover the story”, he says with dismay.

Jadallah appears to be familiar with the international media’s work in the West Bank. As Israel maintains a heavy control over the media coverage, he underlines, foreign journalists prefer to hide the truth from occupied Palestine. While Israel refuses to abide by international conventions regarding the treatment of Palestinian prisoners, the silence of international media may risk allowing Israel to continue to breach international humanitarian law.

“Why can they not cover what’s going on in Palestine? By not showing the reality, they are covering up Israel’s crimes. This is not professional, this is not human”, Jadallah asserts.

Anat Matar and Abeer Baker are co-editors of ‘Threat: Palestinian Political Prisoners in Israel’, a collection of essays written by prisoners, ex-prisoners, human rights defenders, lawyers and academic researchers, that shed light on the subject of Palestinian prisoners from a variety of perspectives. Matar refers to the personal testimonies, the legal analysis on Israel’s breaches of international treaties, and the exchange release deals as some key parts of the book.

Despite the many endorsements and some good reviews, Ms Matar regrets there was marginal interest in the subject from the mainstream media. “We tried to raise media attention in both the Israeli and international press, unfortunately we were not successful”, she says disappointed.

Ms Baker finds the reaction the book got was good, but agrees it had a limited scope. “It showed how little people knew about Palestinian prisoners, many were interested to hear more, but still I don’t think we had a ‘flood’ of writings”, she admits. In addition, Baker observes that prisons are a place in which Israel uses its full control over prisoners, their families and children. “The prison is used as a tool to hinder their struggle and silence their voices. No one will ever be able to understand the Occupation if he or she knows little about Palestinian prisoners”, the human rights lawyer states.

One of the main issues that should be presented by the media in relation to Palestinian prisoners is administrative detention. Addameer legal researcher expresses concern regarding this practice used by Israel against human rights defenders, journalists, legislators, as well as peace activists, women, children, elders.

“Why the need to arrest masses of Palestinians? It’s a punishment for prisoners, for their families, and the Palestinian society. What Israel is doing to Palestine is ‘social genocide’”, Jadallah condemns. Likewise, Ms Baker sees administrative detention as a major question that should be addressed.

“This practice of detaining Palestinians without charges and based on classified evidence shows the easy way to get the freedom from innocent people solely for political purposes”, she argues. In particular, Ms Matar notes that the arrest campaign of political leaders and activists (namely leaders of popular resistance committees) is left under-covered in the media.

“This issue includes that of child prisoners, accused of stone-throwing, since many children are detained in order to criminalize leaders and organisers of peaceful demonstrations”, Ms Matar adds.

Like Baker, Jadallah regards solitary confinement another primary issue of concern. There are prisoners who have been in isolation since many years. Some of them have died in prison, some others have been released just before dying. “We want to stop this policy, it is a crime, it is against the law and against the Israeli prison service regulations”, he adds.

One of the minimum demands of the Palestinian people to return to the negotiating table is that all the political prisoners should be released. Ms Matar believes this issue will be addressed more by the media in time.

“If Israel wanted peace -and if the US and Europe did too- demanding a gradual release of all political prisoners, in line with the implementation of the peace process, would be so critical”, she voices.

Ms Baker thinks that the demand for releasing prisoners will be highlighted in the next peace talks, though to a lesser extent than the issues of borders, refugees, and East Jerusalem.

“How can Israel make peace if it doesn’t want to release prisoners of war? There cannot be peace in the Middle East without the release of all the Palestinian prisoners”, Jadallah argues.