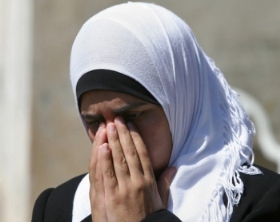 Palestinian Researcher, specialized in Detainees Affairs, Riyadh Al-Ashqar, stated that female detainee Hana’ Yahia Ash-Shalaby, 28, declared hunger strike after Israel transferred her into Administrative Detention without charges for six months.Hana’ was kidnapped by the army one week ago when the soldiers rearrested five of the detainees, including Hana’, who were released under the Shalit Prisoner-Swap deal. Troops violently broke into her home and searched it terrifying the family and causing excessive damage to the property, and kidnapped her; they also confiscated cell phones and a computer from the home.

In it worth mentioning that detainee Khader Adnan agreed, on Tuesday, to end his 66-day hunger strike after meeting with Israeli officials who pledged to release him in April.

Khader had been near death, facing possible organ failure, for the last week in an Israeli prison hospital. He was protesting his illegal detention under “Administrative Detention” orders without charges.