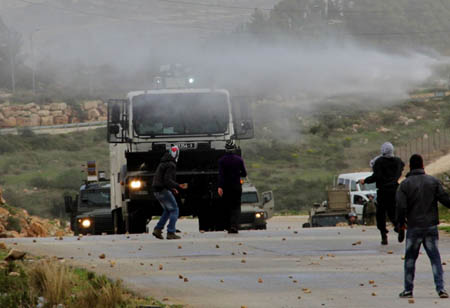 In its Weekly Report On Israeli Human Rights Violations in the Occupied Palestinian Territories for the week of 16 – 22 Feb. 2012, the Palestinian Center for Human Rights found that 25 civilians were wounded this week, and 21 abducted in 74 incursions by the Israeli military into Palestinian territory.Israeli forces have continued bombardments and shootings in the Gaza Strip, including 5 airstrikes and 9 missiles that wounded 14 civilians, including 2 women and 3 children. A metal workshop was destroyed and several houses and civilian establishments were damaged.

4 protesters were wounded in front of ‘Ofer prison, southwest of Ramallah, in a protest in support of Palestinian prisoner Khader Adnan.

Israeli forces raided houses of members of the Palestinian Legislative Council and the office of PLC members of Hamas Change and Reform Bloc.

Israeli forces abducted 3 Palestinians at checkpoints in the West Bank.

On Monday, 20 February, at approximately 12:50, an Israeli forces undercover unit kidnapped Umar Khaled Abu Rweis, 23, from al-Am’ari refugee camp, west of al-Bireh. The members of the undercover unit severely beat Abu Rweis while transferring him to Qalandia checkpoint, north of Jerusalem, and then to an unknown destination. According to investigations made by PCHR, at approximately 12:50, an Israeli forces undercover unit consisting of five armed members traveling in two vehicles, a white Mercedes bus and a white lorry, with Palestinian registration plates, stopped near the main entrance of the Palestinian Red Crescent Society (PRCS) in al-Bireh on the main road between Ramallah and Jerusalem. Then the white Mercedes bus parked in front of PRCS main gate. Abu Rweis who works as a guard at PRCS walked to the driver to tell him that he was not allowed to park in front of the gate. At that moment, all the five armed members of the undercover unit stepped down and kidnapped Abu Rweis at gunpoint. They took him to the bus and drove to Qalandia checkpoint. They severely beat Abu Rweis with their hands, legs and gun butts throughout the body.

The Israeli Municipality’s District Committee for Planning and Building in Jerusalem approved a plan to construct a large building in the yard of the al-Buraq Wall (the Western Wall) opposite to the western wall of the al-Aqsa Mosque and near the Mughrabi Gate Bridge. The building will be called ‘Beit Halibah’. According to the plan, the building area is estimated at approximately 3,700 meters squared, consists of three floors and two underground floors. The building was prepared for use by Jewish settlers and foreign tourists, as well as an information center and exhibition grounds.

During the reporting period, many peaceful demonstrations were organized in support of and in solidarity with Khader Adnan , the Palestinian prisoner who has been holding an open-ended hunger strike in an Israeli jail since 17 December 2011. Israeli forces used excessive force against participants in these demonstrations which were called for by the student movement in Birzeit University, in front of ‘Ofer’ prison, southwest of Ramallah. As a result, 4 Palestinian civilians were wounded.

At approximately 13:00 on Tuesday, 21 February 2012, dozens of Palestinian civilians and families of Palestinian prisoners in Israeli jails gathered to organize a peaceful demonstration in support of the Palestinian prisoner in Israeli jails Khader Adnan . The demonstration was called for by the student movement in Birzeit University. The demonstrators headed to ‘Ofer’ prison in the southwest of Ramallah, and then they walked towards the gate of the prison. Israeli forces closed the gate. Before the demonstrators arrived at the gate, Israeli forces fired rubber-coated metal bullets, metal bullets, tear gas canisters and sound bombs at the demonstrators who threw stones at Israeli forces. As a result, 4 students from Birzeit University were wounded. The wounded students were transferred to Palestine Medical Compound in Ramallah for treatment. Additionally, many participants suffered from tear gas inhalation including Nawal Jamil Abdul Hamid, 52. Israeli forces also abducted Nidal Ahmed Abu ‘Ein, 20, and Mahmoud Ghasan Dar al-Sheikh, 22, and took them to ‘Ofer’ prison.

Israeli forces have established checkpoints in and around Jerusalem, severely restricting Palestinian access to the city. Civilians are frequently prevented from praying in the al-Aqsa Mosque in Jerusalem.

There are approximately 585 permanent roadblocks, and manned and unmanned checkpoints across the West Bank.

At least 65% of the main roads that lead to 18 Palestinian communities in the West Bank are closed or fully controlled by Israeli forces.

In the Gaza Strip, Israeli warplanes launched 5 airstrikes at civilian targets and training sites used by groups of the Palestinian resistance. In these airstrikes, Israeli forces fired 9 missiles. Additionally, Israeli forces fired 2 artillery shells at a site of the Palestinian National Security Service. As a result, 14 Palestinians, including 2 women and 3 children, sustained bruises and wounds by shrapnel wounds. Additionally, the destructions and damages were caused to the targeted places and their surroundings.

On Thursday, 16 February, at approximately 22:10, Israeli forces an Israeli forces warplane fired two missiles at Zuhdi Ashor & Sons Metal Workshop, east of al-Zaytoon headquarters in the east of Gaza City, which is owned by Eyad Zuhdi Rashad Ashour, 38. As a result, the workshop, which measures 600 meters square, was totally destroyed. The windows of the house of Eyad Zuhdi Rashad Ashour which is built on top of the workshop were crushed as well. Additionally, Mohammed Salim Ramadan Ashour, 27, sustained light wounds.

Israeli forces abducted 2 Palestinians in the south of the Gaza Strip while they were getting ready to hunt birds.

Israeli forces detained a Palestinian patient at Beit Hanoun (Erez) crossing for several hours as he was on his way to al-Maqased hospital for treatment.

Following the Friday Prayer on 17 February 2012, dozens of Palestinian civilians, international and Israeli human rights defenders organized a peaceful demonstration in Bil’in village, west of Ramallah, protesting the construction of the annexation wall, marking the seventh anniversary of the popular resistance in Bil’in and in support of Khader Adnan, the Palestinian prisoner who has been holding an open-ended hunger strike in an Israeli jail. They raised the Palestinian flag and the photos of the PLC member in Israeli jails Marwan al-Barghouthi and Khader Adnan. They called for ending the political division and for releasing all the Palestinian prisoners in Israeli jails. They then moved towards areas of Palestinian land, which the Israeli High Court ordered to be returned to their Palestinian owners. Israeli soldiers stationed in the area fired rubber-coated metal bullets, sound bombs and tear gas canisters at the demonstrators. As a result, a number of Palestinians sustained bruises and suffered from tear gas inhalation.

Also following the Friday Prayer, on 17 February 2012, dozens of Palestinian civilians, international and human rights defenders organized a peaceful demonstration in Ni’lin village, west of Ramallah, in protest against the construction of the annexation wall and in support of the Palestinian prisoner Khader Adnan. They chanted slogans calling for Palestinian reconciliation, adherence to the Palestinian inalienable rights and resistance of the occupation. They clashed with Israeli troops positioned near the annexation wall. Israeli soldiers fired rubber-coated metal bullets, sound bombs and tear gas canisters at demonstrators. As a result, a number of demonstrators suffered from tear gas inhalation.

Also following the Friday prayer on 17 February 2012, dozens of Palestinian civilians and Israeli and international human rights defenders gathered in the center of al-Nabi Saleh village, northwest of Ramallah, to start the weekly peaceful protest against the construction of the annexation wall and settlement activities and in support of the Palestinian prisoner Khader Adnan. They raised the Palestinian flag and the photos of Palestinian Prisoner Khader Adnan and other prisoners. The protesters walked towards the gate erected by Israeli forces near the entrance of the village and leading to Palestinian lands that Israeli settlers from the nearby ‘Halmish’ settlement are trying to seize. Israeli soldiers, who had been extensively deployed in the area and near all the entrances of the village since the morning, began to confront the protesters who wanted to walk towards the affected lands. Israeli soldiers fired live and rubber-coated bullets, sound bombs and tear gas canisters at the protesters. As a result, 2 Palestinians (PCHR maintains their names) sustained wounds. In addition, dozens of Palestinian civilians and human rights defenders suffered from tear gas inhalation.

Also following the Friday Prayer, at approximately 12:45 on the same day, dozens of Palestinian civilians, international and Israeli human rights defenders organized a peaceful demonstration in Kafr Qaddoum village, northeast of Qalqilya, in protest against closing the eastern entrance of the village. The demonstrators headed towards that entrance. Israeli soldiers fired sound bombs and tear gas canisters at them. As a result, 5 demonstrators including an Israeli peace activist, were wounded. (PCHR) maintains of the names of the wounded.

At approximately 12:30 on Tuesday, 21 February 2012, Israeli forces positioned in watchtowers at the border fence near Beit Hanou (Erez) crossing, north of the Gaza Strip, fired at a group of demonstrators and Palestinian and international activists in the vicinity of the crossing. The demonstration was comprised of approximately 80 protestors, including 63 international activists, 10 journalists and representatives of Palestinian resistance groups. When they approached to a distance of 150 meters from the border, Israeli forces opened fire, but no injuries were reported.

Saber al-Za’neen, Coordinator of the Local Initiative in Beit Hanoun and the supervisor of the demonstration, said that at approximately 11:30 on the said day, a demonstration headed to the northern area. When they reached the cement wall, at approximately 12:30, an activist planted the Palestinians flag. In response to this act the Israeli soldiers positioned in the watchtower opened fire. The demonstrators were terrorized and fled out of the area. No injuries were reported.