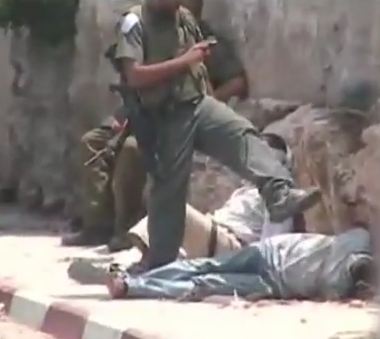 A new video showing Israeli soldiers abusing Ashraf Abu Rahma, who was cuffed and blindfolded, was released after being shot by a hidden camera in Ni’lin village, near the central West Bank city of Ramallah.

The video shows a cuffed and blindfolded Palestinian youth who was kidnapped during the weekly nonviolent protest against the illegal Israeli Annexation Wall and Settlements. These protests are organized by the local residents, along with Israel and International peace activists.

The cuffed Palestinian is seen on the ground while the soldiers are just moving him around, dragging his feet sometimes, and placing him in a sitting position against a wall next to another blindfolded and cuffed Palestinian.

It also shows the one of the soldiers standing next to him with his foot raised close to the head of the youth, posing as if he is going to crush his head while filming the abuse using what seems to be his mobile phone.

There have been several incidents where soldiers filmed themselves abusing detained Palestinians at roadblocks, and in other areas in the occupied territories.

In many other incidents, soldiers were caught on tape abusing the Palestinians, similar to the case of Ashraf Abu Rahma, several soldiers even posted on Facebook videos they took of themselves or fellow soldiers while abusing Palestinians in the occupied territories. In 2010, Israeli soldier Eden Abergil posted pictures on her personal Facebook page posing in front of Palestinians detained, cuffed and blindfolded at a roadblock in the West Bank.