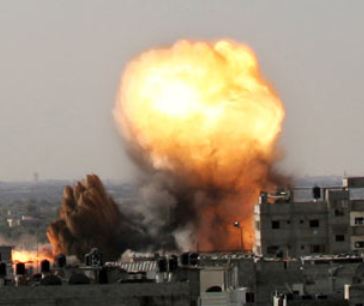 Israeli soldiers invaded, on Friday evening, an area east of the Al-Boreij Refugee Camp, in central Gaza, firing dozens of rounds of live ammunition, while military choppers flew overhead firing flares.The motives of the invasion remain unknown as the soldiers just searched the area and withdrew later on; no arrests or injuries were reported.

On Friday at dawn, two Palestinians were wounded after the Israeli Air Force fired missiles in the Car Market area in Gaza; one of them was treated by field medics while the other was moved to a local hospital.

Also on Friday, Israeli troops shot and killed one Palestinian near the central West Bank city of Ramallah during clashes that took place after the Palestinians held a protest against the ongoing settler attacks, and the Friday attack carried out by the soldiers against worshipers at the Al-Aqsa Mosque in occupied East Jerusalem.

In its weekly reported for the week of 16 – 22 Feb. 2012, the Palestinian Center for Human Rights found that 25 civilians were wounded, and 21 were abducted in 74 invasions carried out by the Israeli military into the Palestinian territories.