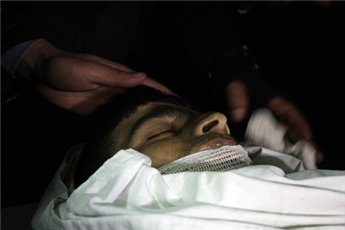 Palestinian medical sources reported, on Friday evening, that one resident was killed and four were residents were wounded, two seriously, during clashes that took place on Friday evening between dozens of youths and Israeli troops near the Qalandia terminal, between the central West Bank city of Ramallah and occupied East Jerusalem.The slain resident, Tal’at Ramya, 25, was shot by a live round in the heart; he is a resident of Al-Ram town, northeast of Jerusalem.

The residents were protesting the settlers’ attempts to break into the Al-Aqsa Mosque in occupied Jerusalem, and the prevention of Palestinians from reaching the mosque to pray.