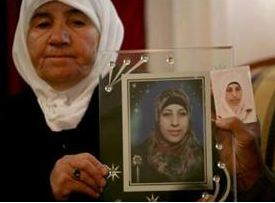 Female detainee, Hana Ash-Shalabi, entered her eleventh day of open-ended hunger strike at her cell at the Ha-Sharon Israeli prison, protesting her illegal detention and the administrative detention order served against her without charges. Ash-Shalabi, 28, from Jenin in the northern West Bank, is the first female detainee who was release under the Shalit prisoner-swap deal to be re-arrested by the army. She was taken prisoner on February 16, 2012, and was ordered under Administrative Detention for six months.

She said that she will continue her strike until an order for her release is issued, similar to the case of detainee Adnan Khader who carried out a 66-day hunger strike until Israel pledged to release him in April. He had been near death, facing possible organ failure at an Israeli prison hospital.

Atalla Abu As-Sabah, Minister of Detainees at the Hamas-led government in Gaza, stated that Shalabi’s health condition is deteriorating, and that she is currently in solitary confinement, while the Israeli Prison Administration is threatening to transfer her to an Israeli prison for female prisoners held on criminal charges.

He voiced an appeal to the Egyptian security chief, Morad As-Sufi, to intervene in order to stop the illegal Israeli policy of re-arresting the detainees who were release under the Shalit deal. Officials at Egypt’s Intelligence Services played an essential role in negotiating, finalizing, and implementing the swap-deal.

It is worth mentioning that Shalabi’s parents, both 67 years old, also declared hunger-strike until they receive news about their daughter, the Palestinian Information Center reported. Shalabi spent 2.5 years in detention before she was release under the swap-deal.