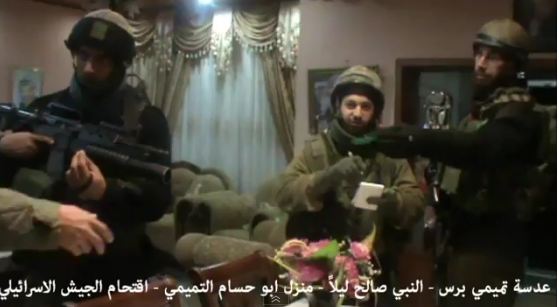 Israeli troops invaded, on Sunday at dawn, Nabi Saleh village, northwest of the central West Bank city of Ramallah, broke into several homes and searched them causing extensive damage.Local sources reported that soldiers also fired flares while driving in the streets of the village, and carried pictures of Palestinian activists, seeking their arrest. The activists are believed to be organizers, or active participants, in the weekly nonviolent protests held against the illegal Israeli Annexation Wall and illegal settlements.

The army conducted no arrests during the invasion, while several soldiers were telling the residents that “they (the soldiers) will be back, and will break into the homes”.

The invasion is part of a series invasions that also targets Bil’in and Ni’lin village, near Ramallah, also very active in weekly protests against the Annexation Wall and settlements.